The opening ceremony of the 1st Vocational Skills Competition

In a congratulatory letter to the event, Chinese President Xi Jinping said skilled workers are an important force in China’s manufacturing and innovation sectors.

“The vocational skills competition offers a platform for skilled talent to show off their skills and exchange with each other,” Xi said. “It’s expected to help expand the number of skilled workers and promote economic and social development.”

He called for governments at all levels to attach greater importance to skills, promoting the spirits of labor, labor models and craftsmen to encourage more people, especially the younger generation, to pursue high-level skills and cultivate more skilled talent. 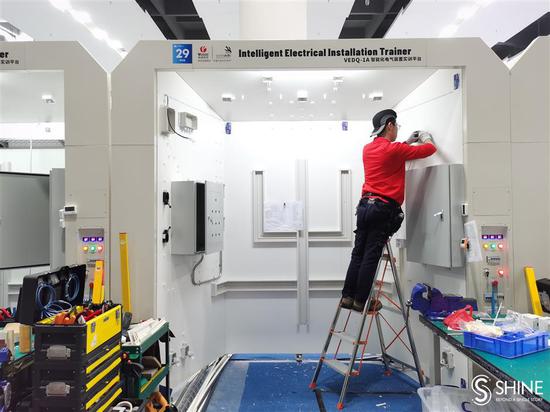 Electrical Installation is just one of the competition's many skill categories.

With the theme “New Era, New Skills, New Dream,” the competition is the largest ever in China and will be held biennially.

The first competition is hosted by the government of Guangdong and will run through Sunday, with 2,557 contestants from all over the country competing in 86 skill programs and assessed by 2,376 judges.

The competitors, 83 percent male and 17 percent female, are between the ages of 16 and 58, and 90 percent are younger than 30. Almost half are students from vocational and technical schools, and more than 40 percent are college and university students. The rest are employed by businesses. 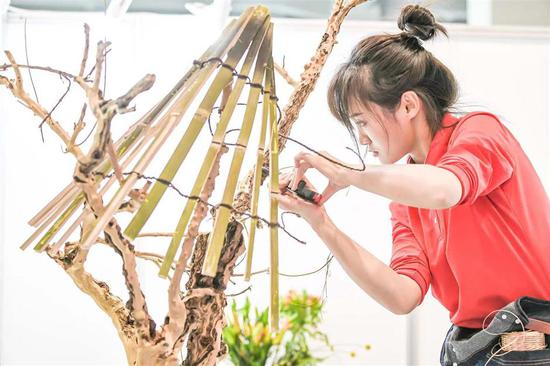 A competitor competes in the floristry program.

Among the skill programs, 63 are included in the 46th WorldSkills Competition scheduled to take place in Shanghai in 2022. As such, contestants in these programs will also compete for places on the national training team for international competition.

Nine of the skills programs are for pairs, one is for trios and the other 76 are for single participants. 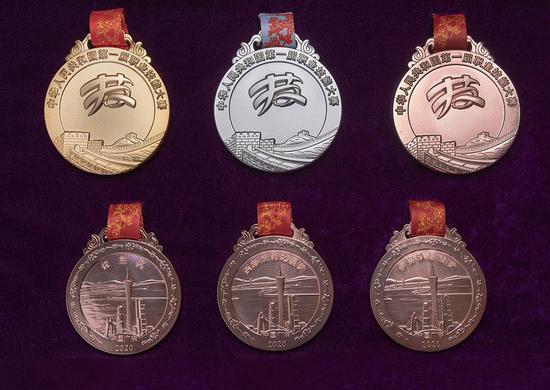 The medals for winners

“All the skills serve the real economy,” Zhang said. “More than half belong to production and services industries, and about 40 percent to emerging industries.”

Winners will be announced at the closing ceremony Sunday night.

The top three winners or winning teams of each skill program will be given gold, silver and bronze medals. Contestants and teams who finish in the top half of each program will receive medallions for excellence.

To encourage participation from people in West China, the event will give out awards exclusively for them.

The medals have the Chinese character for skill and an embossment of the Great Wall on one side, and images of Guangdong landmarks such as the Canton Tower and the Hong Kong-Zhuhai-Macau Bridge on the other.

More than 10,000 people entering the 224,000-square-meter event venue, including contestants, judges, delegation members, observers and media, have taken at least two nucleic acid tests in advance. They’ve also been reporting their health conditions every day since the end of November.

More than 100 companies, including Huawei, Tencent and Siemens, have provided 630-million yuan (US$96.21 million) worth of equipment and technical support for the event, such as workshop construction and devices similar to those used in real work environments, including helicopters, subway cars and milling machines.

Organizers selected 600 volunteers from technical schools in Guangzhou out of 2,000 applicants to serve in roles such as event organization, pickup, reception and etiquette service.

Due to the pandemic, only a limited number of people can watch the competition on site, but there are livestreams for people to watch it online.

The event also features interactive activities, including 179 booths set up by government agencies, enterprises and schools to show the development and characteristics of various skills, as well as the latest technologies and products.

There will also be 20 performances of traditional Chinese skills. Organizers received 171 performance applications related to high technology, handicrafts and artistic creativity. Forty of them have been broadcast online and received more than 20 million votes. The top 10 will be selected and awarded at the competition’s closing ceremony.

Over half of China’s hair transplant consumers are post-90s: statistics

People have fun in Jinfo Mountain in SW China’s Chongqing