BEIJING, Dec. 15 (Xinhua) — Today marks the five-year anniversary of the launch of the Beijing Organizing Committee for the 2022 Olympic and Paralympic Winter Games (BOCOG), and the committee remains on track to host a green, open, and transparent Olympic spectacle.

From inspiring a whole generation of winter sports enthusiasts, to building an environmentally friendly and sustainable Games, China is delivering on its bid promises despite challenges and obstacles such as the global COVID-19 pandemic. 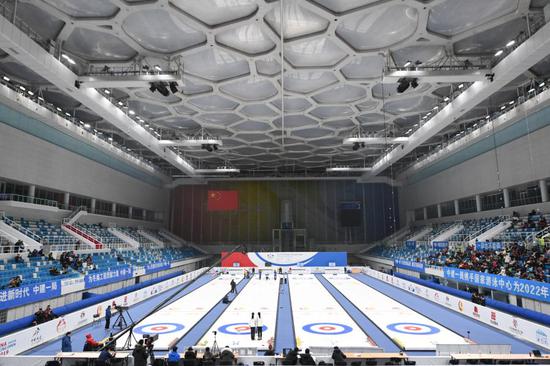 Beijing’s Capital Gymnasium, set to host figure skating events at the 2022 Winter Games, last month witnessed the production of ice using carbon dioxide as a refrigerant, marking the first time this process has been used in Olympic history.

The breakthrough preceded ice-making at the 2022 Games venues in the Beijing competition zone, four of which will use the new technology that has nearly zero carbon emission and is expected to save more than 40 percent in energy consumption compared to an ice rink without this system.

It is just one of the 119 specific measures, under 12 actions, specified in the Sustainability Plan for Beijing 2022.

“Our vision is to achieve sustainability for the future. As part of our green initiative, Beijing 2022 has placed top priority on ecological preservation, conserving resources and environmental friendliness,” said Liu Xinping, head of the BOCOG’s sustainability project.

In Yanqing, one of three competition zones for the 2022 Winter Games, a series of environmental protective measures have been implemented in the construction of the new venues. Experts from Beijing Forestry University conducted an ecological study to ensure an effective transplanting plan in the conservation area in order to protect the indigenous flora during the process.

“Some 30,000 trees have been transplanted in the mountains, and the survival rate of the transplanted trees is over 90 percent,” said Liu.

In a further move in the quest for sustainability, all Beijing 2022 venues will be powered by green electricity. Zhangjiakou is known for its rich resources in renewable energies, and much of the power consumption in the Chongli district, where all the Zhangjiakou venues are located, will be supplied from renewable energy resources by 2021. 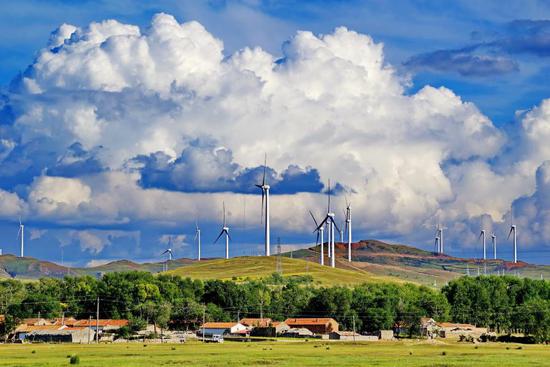 COVID-19 curtailed last year’s ski season, but with the virus well contained in China, ski slopes in Chongli are busier than ever since resuming operation in October.

“All ski resorts are packed with people on weekends. Some hotels have been fully booked until after this upcoming Spring Festival,” Liang Lifang, an official at the local tourism bureau, told Xinhua on Monday. “The number of visitors is expected to hit a new high during this snow season.”

Skiing in China was once seen as foreign and unaffordable, but thanks to the country’s growing middle class and budding excitement in the leadup to the 2022 Winter Olympics, an ever-increasing number of people are taking to the slopes.

“As China has pledged to get 300 million people involved in winter sports, hopefully more and more people will love skiing and skating,” said Liang.

Today the resorts in Chongli district are filled with both young, and first-time skiers, but the mountain was once home to a tiny farming village. In 2015, 16.8 percent of the 100,000 residents in this town were classed as living below China’s national poverty line, with most locals leaving to work in Beijing and other major cities.

Yu Lei, a local ski trainer, said the transformation sparked by China’s successful Olympic bid, have been dramatic. “Before, Chongli was a small poverty-stricken county,” Yu said. “But now I earn more than I used to working in Beijing. Like me, a lot of the people who had left to work in Beijing have returned.”

In May last year, Chongli was officially lifted out of poverty. Nearly 30,000 of its 126,000 population are employed by ski resorts or related companies and organizations.

“The Games represent a formidable asset to accelerate some long-term developments. This is what has been done for Beijing 2022, and we’ve learned a lot,” said Olympic Games executive director Christophe Dubi.

While China has considerable experience of and expertise in infrastructure construction, the country had little prior knowledge of organizing major winter sport events. Before preparations for Beijing 2022 began, China had no Olympic-standard alpine ski pistes, let alone bobsleigh, skeleton, or luge tracks.

“The lack of expertise in winter venue operation and technical support has been a challenge,” said Tong Lixin, director of the sports department of BOCOG.

To combat this lack of experience, China has brought overseas experts on board in preparation for the 2022 Winter Olympics, just as it did for the 2008 Summer Games.

“More than 30 foreign experts from Russia, Finland and other countries have been hired and currently work at 10 departments of the organizing committee,” said Yan Cheng, head of BOCOG’s human resources department.

Laszlo Vajda from Hungary was involved in Beijing’s bid for the 2022 Games and currently works at the village planning and operation department. Vajda said he is very happy to contribute to the 2022 Games. “The Olympic Games is a universal celebration. We are one community with a shared future,” he said.

It clearly resonates, as more than 960,000 volunteer applications from 168 countries and regions have been received, according to the BOCOG.

“It represents the common aspiration worldwide for a successful Beijing 2022,” said Teng Shengping, director of the BOCOG’s volunteer department.

Close ties have also been fostered between BOCOG and the organizing committees of PyeongChang 2018 and Tokyo 2020, with cooperation in areas such as personnel training, promotions and sustainability.

Cost control is an economic precondition for Olympic success. While an audit department was set up from the outset to supervise fundraising, procurements and expenditure in the leadup to the 2022 Games, the organizers are working hard to avoid cost overruns.

“Saving cost is an important manifestation of hosting a corruption-free Olympic Games,” said Han Zirong, vice-president and secretary-general of Beijing 2022. “We will strive to host an excellent Winter Games in a frugal manner.”

According to Han, the BOCOG has formulated a plan for streamlining the Games and will learn from Tokyo 2020’s practices before drafting a more detailed plan.

In fact, it’s already a reality. One of Beijing 2022’s greatest initiatives is the urban regeneration of the Shougang district, formerly an industrial complex which was relocated out of the city after Beijing 2008. Cooling towers have been transformed into Olympic venues, blast furnaces into training centers, and an iron ore storage tower has even become home to the Organizing Committee.

Beijing will also re-use eight venues from the 2008 Olympics for the 2022 Winter Games. Among these, the “Water Cube” will host the curling events, and the National Indoor Stadium will host ice hockey events. The Opening and Closing Ceremonies will once again take place at the Bird’s Nest.

IOC President Thomas Bach has lavished praise on the Beijing 2022 strategies on several occasions. “Beijing is making the best out of this because the organizing committee there is using the great legacy of Beijing 2008 for the Olympic Winter Games Beijing 2022,” he said.

Another key move to lessen the cost will see the Main Press Center and International Broadcasting Center merged into one entity – the Main Media Center (MMC).

“In the past, it (MMC) was more like two separate areas in one building,” said Xu Jicheng, head of the BOCOG media operations department.

“However, this time, Beijing 2022 will fully integrate the two to redefine the concept. The IOC hopes to take this chance to promote this practice to future Olympic Winter Games or even Olympic Games.”