HEFEI/NANJING, Dec. 24 (Xinhua) — Instead of sailing a boat and catching fish on the Yangtze River, ex-fisherman Wang Gende’s daily work now is skippering an engineering boat to provide port services on the longest waterway in China.

The Yangtze, which stretches over 6,300 km, has a rich and complex terrain and climate along its basin and boasts one of the highest levels of biodiversity in the world.

According to China’s 2019 bulletin on aquatic biological resources and habitat status in the Yangtze River basin, the water quality in major fishery waters is good. However, the protection situation of some rare and unique aquatic species is still grim.

In January this year, in a significant move to protect biodiversity, China began a 10-year fishing moratorium in 332 conservation areas in the basin, which will expand to all the natural waterways of the river and its major tributaries from no later than Jan. 1, 2021.

The effort is seeing notable results. “The biodiversity is recovering in the Yangtze. The species number has so far increased to 79 in the Jiangsu section of the river from 48 at the beginning of 2017,” said Zhang Jianjun, deputy director of the department of agriculture and rural affairs of east China’s Jiangsu Province. 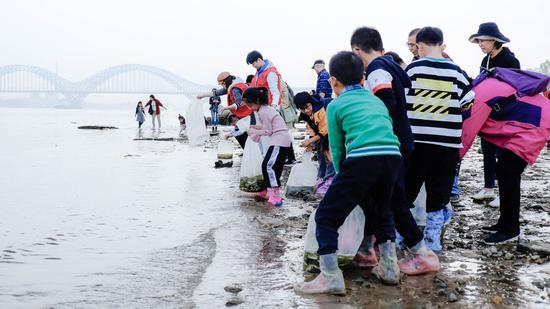 Wang’s family has been fishing for generations. In the past decades, 55-year-old Wang personally experienced the depleting fishing resources of the Yangtze.

“In the 1980s, we could catch over 50 kg of fish a day, and many were big. Yet the number has slumped to less than 10 kg, and some species, like pufferfish, have been absent from our nets since 2000,” Wang recalled.

In recent years, the annual catch from the Yangtze has fallen to less than 100,000 tonnes from more than 420,000 tonnes in the 1950s, accounting for only 0.32 percent of China’s total freshwater aquatic products.

As early as 2019, Wang and 587 other fishermen in the village bid farewell to their fishing boats. “Our boats were dismantled, and the government offered us subsidies of some 170,000 yuan (about 26,000 U.S. dollars) and social security services,” said Wang.

According to the Ministry of Agriculture and Rural Affairs, 231,000 fishermen on 111,000 boats have to date relinquished their nets in ten provincial regions along the river.

Meanwhile, an annual number of over 5 billion captive-bred fish fries have been released into the river, said the ministry.

“Now there are no fishing boats on the river, and sometimes I can see people releasing fish fries in the river. They’re good signs, showing the recovering biodiversity,” said Wang. 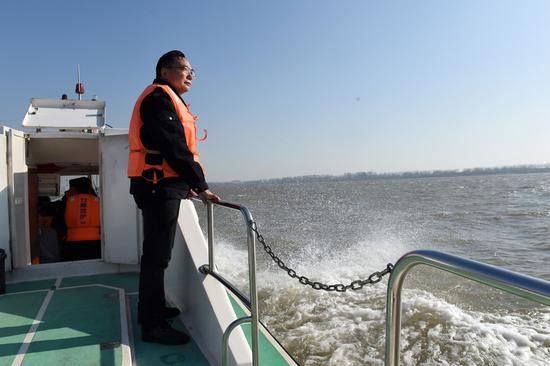 As the fishing ban has sounded the horn, the regions along the river have also launched a campaign to save rare and endangered species, including the Chinese sturgeon and the finless porpoise.

Zhang Xianmin, 52, who fished in the river for over three decades, became part of a finless porpoise protection team in Anqing City, Anhui, after moving ashore in 2019.

“I patrol the Yangtze River with other members every day to observe the finless porpoise, and see if there are illegal activities such as fishing and sand mining that threaten the living of the creature,” said Zhang.

However, according to a research study in 2017, the river mammal is teetering on the brink of extinction. Its population is only around 1,000 in the main waterway of the Yangtze.

In 2017, Hu Shibin, 57, established the patrol team with six ex-fishermen. “The team members have so far increased to 21, and the daily patrol covers 180 km of the waterway of the Anqing section of the Yangtze River,” said Hu.

Besides Anhui, other provinces along the river, including Jiangsu, Hubei, Hunan, and Jiangxi, have all established finless porpoise protection teams.

Jiangxi also issued a guideline to enhance the protection of the finless porpoise’s habitats. Emergency rescue and patrol mechanisms will improve to reduce unnatural deaths of the animal.

Thanks to the joint efforts, the creature in the Yangtze has seen a significant increase. “The number of the species in the Nanjing section has jumped to 50 from less than 30,” said Yang Guang, head of the Nanjing finless porpoise conservation association.

Local governments have taken measures, including eliminating “black and odorous” water bodies and closing illegal sewage outlets along the river, to reduce water pollution. Many ex-fishermen are also making efforts to create a clean home for aquatic life.

Standing on the bow, Xiao Lyuying, 75, skillfully scooped up a plastic bottle with a fishing net while another boatman steered the boat.

Xiao, an ex-fisherman, is the deputy head of a volunteer team engaged in cleaning floating trash from the Yangtze. Organized in 2019, the team comprises more than 50 local ex-fishermen aged over 60, on average.

Every month, the team will patrol 15 km of waterway thrice, collecting trash and preventing people from fishing in the river.

“We have lived along the river since childhood and want to do our part to protect it while we are still alive,” said Xiao from Qunxin Village in the city of Tongling, Anhui.

According to Xiao, many fishermen chose to join the voluntary team due to their attachment to the river.

“I have spent most of my life on boats. It’s good to see my fishing skills can still be used in cleaning the garbage,” said Ma Mingsuo, 60. “A clean home for aquatic life will also benefit the future generations.”

“We will continue our efforts to protect the Yangtze River until we are too old to steer a boat. It’s a career that deserves our time and energy,” said Xiao.