With Chinese President Xi Jinping crediting China-ASEAN relationship as “the most successful and vibrant model for cooperation” in the Asia-Pacific, the bilateral relations between the two economies will navigate toward a diamond decade after 10 years of “golden era” – during which China and ASEAN had successfully managed differences and built political trust, in particular on stabilizing the South China Sea (SCS).

Though with constant pressure and disturbance from the US, ASEAN holds hands tightly with China with increasingly stronger ties in economy and strengthened political mutual trust, observers said. From Singapore to the Philippines, more ASEAN countries refuse to take sides between the two powers, and fewer are willing to join the “China-bashing” alliance.

The solid ties, combined with the signing of the world’s largest trade pact, the Regional Comprehensive Economic Partnership (RCEP), will help erect a business circle that generates $18 trillion GDP, or roughly 16 percent of the global economy, helping the region handle the COVID-19 pandemic and rising protectionism.

Within the circle, trade and investment will flow more freely, industrial chains will undergo restructuring to fend off risks, and a new international logistics route will be formed to make the two economies further integrate.

Meanwhile, the cooperation potential in the public health sector is very promising as China could provide its neighbors with rich experiences. 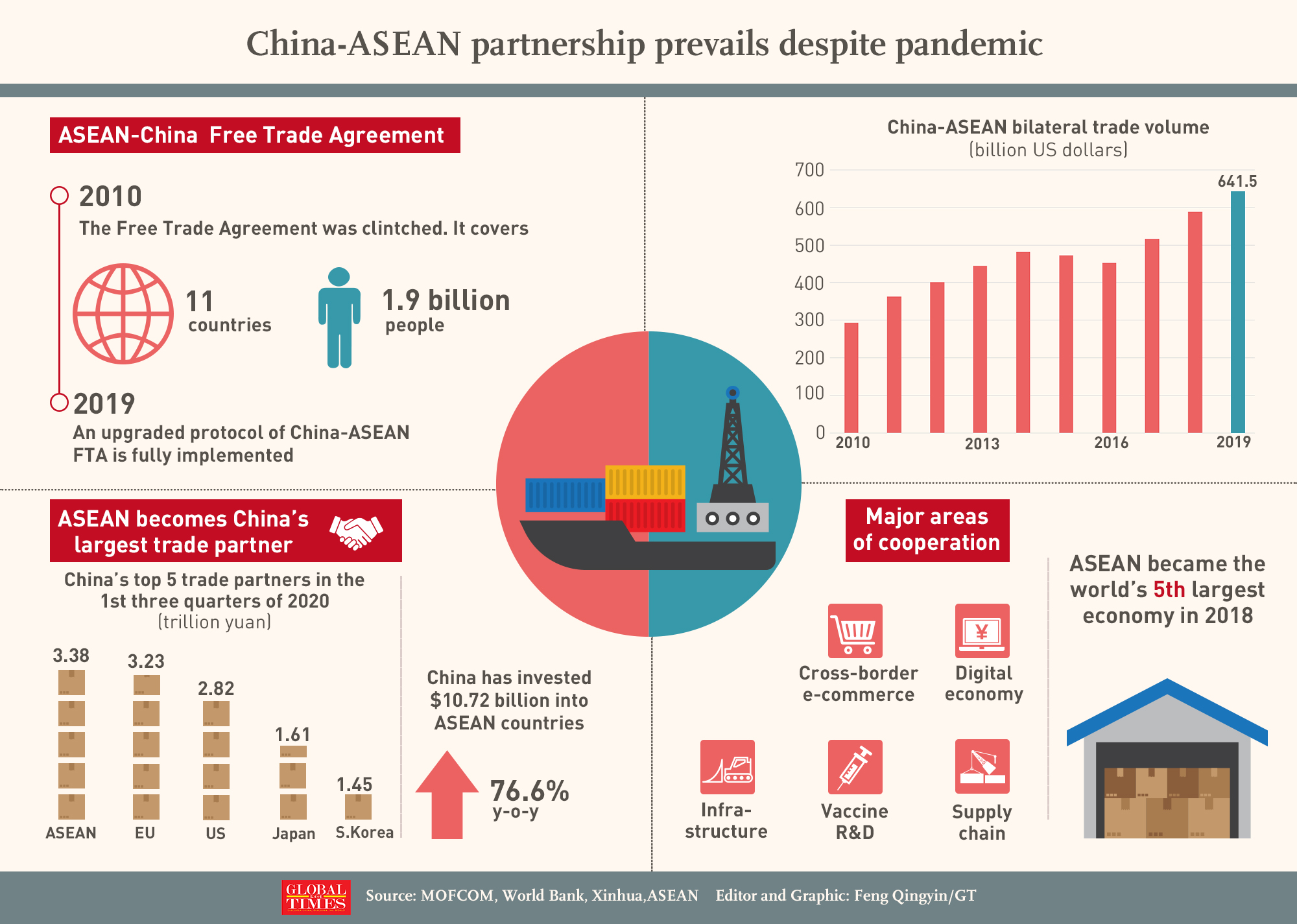 ▲Despite the impacts of COVID-19, ASEAN has surpassed the EU to become China’s No.1 trade partner in the 1st three quarters of 2020. ASEAN–China Free Trade Agreement — covering a population of 1.9b people — has accelerated integration of both economies and created tens of thousands of jobs. Infographic:GT

Xi said on Friday that the China-ASEAN relationship has grown into the most successful and vibrant model for cooperation in the Asia-Pacific and an exemplary effort in building a community with a shared future for mankind.

He delivered a speech via videoconference at the opening ceremony of the 17th China-ASEAN Expo and China-ASEAN Business and Investment Summit on Friday in Nanning, South China’s Guangxi Zhuang Autonomous Region.

“China continues to regard ASEAN as a priority in its neighborhood diplomacy and a key region in high-quality Belt and Road cooperation,” Xi said. He noted that China welcomes the signing of RCEP and looks forward to its early entry into force.

Xi urged more efforts will be made to build the New International Land-Sea Trade Corridor, strengthen cooperation on infrastructure connectivity including railways, highways, ports, airports, power and communications, and speed up the development of existing economic corridors and key projects.

Participants and observers said that Xi’s comment underscores the strong momentum of cooperation and closer relations underpinned by mutual trust between China and ASEAN in the past decade, which is expected to become more well-rounded and pragmatic in the future.

“The scope and depth of China-ASEAN business circle will be unprecedented, enabling both sides to feel the enormous capacity and significance of each other’s markets,” Xu Liping, director of the Center for Southeast Asian Studies at the Chinese Academy of Social Sciences, told the Global Times on Friday. 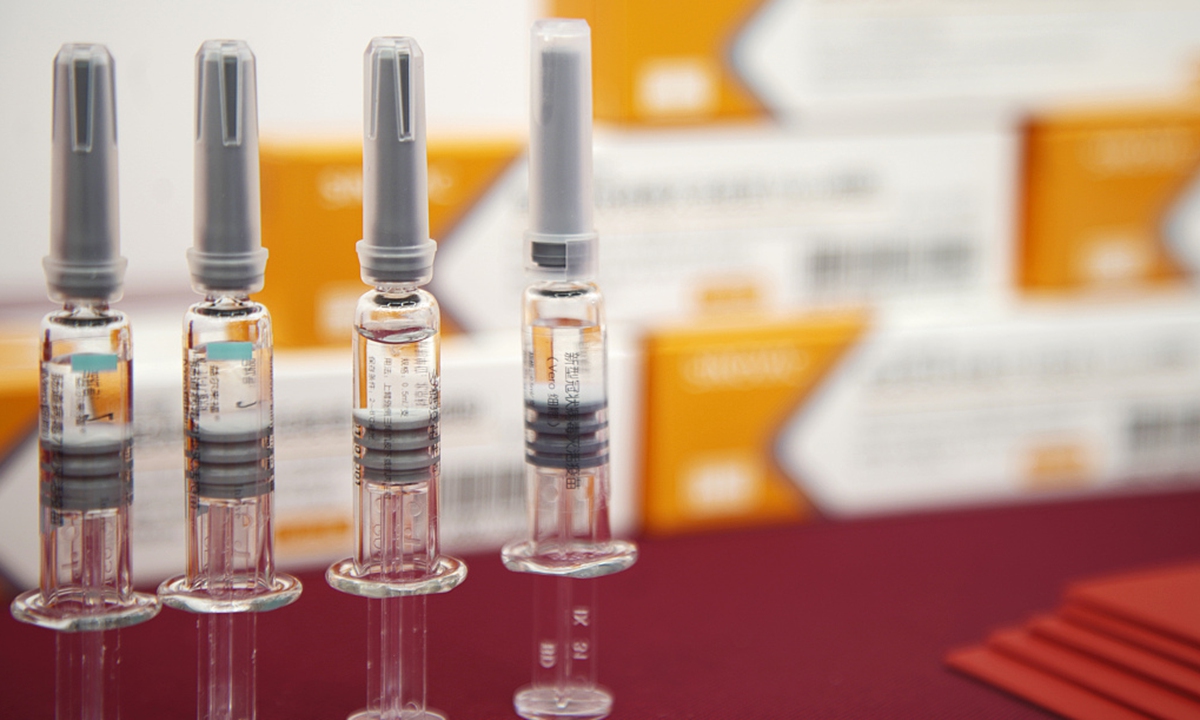 During the speech, Xi stressed that both China and ASEAN need to strengthen cooperation against COVID-19 and enhance capacity building in public health.

“When its COVID-19 vaccines are available for use, China will actively consider the needs of ASEAN countries,” Xi said, adding that China and ASEAN countries will step up information sharing and cooperation on the production, development and deployment of vaccines.

China will also train for ASEAN countries 1,000 administrative and specialized personnel in the health sector between 2020 and 2022, according to Xi.

“China’s coronavirus vaccine research and development (R&D) is leading the world, and China has announced it will make the coronavirus vaccine a global public good. We really appreciate China’s contribution,” Myanmar Ambassador to China U Myo Thant Pe told the Global Times on Friday.

As a vivid display of “crossing [the] river in the same boat,” U Myo Thant Pe said that Myanmar has accepted medical supply donations from China including masks, protective clothing and gloves. And in around January to March, Myanmar also donated 200 tons of rice to Wuhan, capital of Central China’s Hubei Province, hardest hit by the virus in China. . 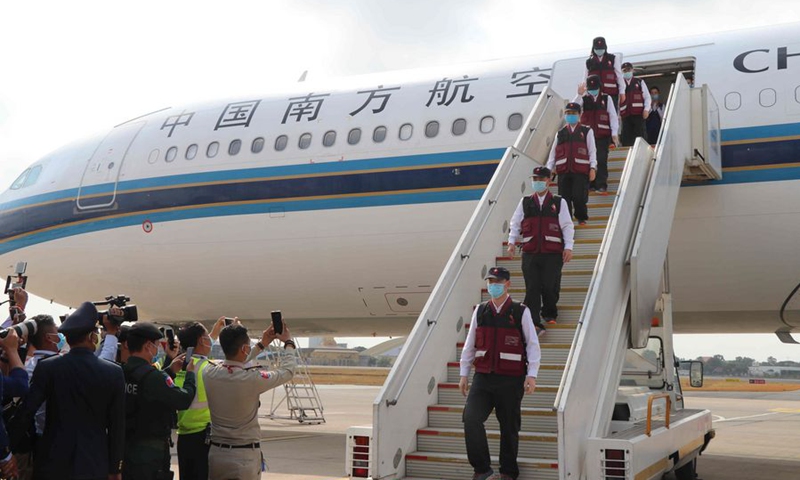 ▲Members of the Chinese medical team walk down the airplane at the Phnom Penh International Airport in Phnom Penh, Cambodia, March 23, 2020.Photo:Xinhua

In late March, a seven-member team of Chinese doctors, along with tons of medical supplies, also arrived in Phnom Penh, capital of Cambodia, helping them combat the  bruising epidemic situation in the country. This marks one of the first medical teams China sent to help ASEAN neighbors.

“China’s vaccine development and its availability to ASEAN countries will enable Southeast Asian governments and peoples to overcome the pandemic’s effects at the earliest possibility,” Nalinee Taveesin, Chairperson of Foreign Affairs of the Pheu Thai Party, said at a dialogue between the CPC and party politicians of South East Asian countries on Thursday.

Shen Minghui, secretary-general of the Center for APEC and East Asian Cooperation with the Chinese Academy of Social Sciences, said that shared economic interests alone cannot bond China-ASEAN into a world model for cooperation.

“During times of difficulty, we support each other with medical and food supplies and shared experiences and technologies. China and ASEAN built a shared public health community, and this is the genuine significance of building a community with a shared future for mankind,” Shen told the Global Times on Friday.

He added that as China has accumulated rich experience in preventing and curing coronavirus, the country could continue exporting such experience to the ASEAN bloc where public health conditions are still not mature enough. 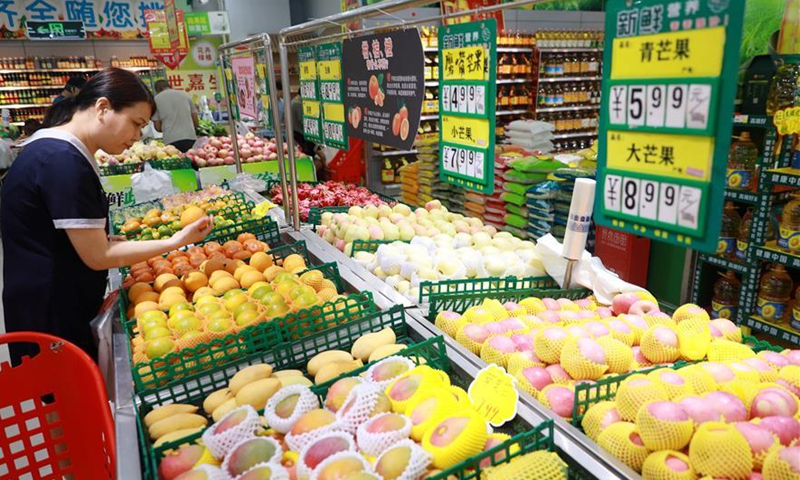 From ‘golden era’ to ‘diamond decade’

In Nanning, which is dubbed as a frontier for China-ASEAN cooperation, it is easy to see rambutan from Thailand and eggfruits from Myanmar when local residents walk into supermarkets.

The access to affordable tropical fruits is partly enabled by a booming trade between China and ASEAN since the signing of the China-ASEAN free trade agreement (FTA) in 2010. An upgraded protocol of the FTA was implemented in 2019.

In 2020, ASEAN took over the EU to become China’s largest trading partner. In the first 10 months of 2020, bilateral trade volume reached 3.79 trillion yuan, up 7 percent year-on-year. China’s investment in the bloc increased 70 percent in the first three quarters of 2020 from last year.

In addition to trade, another highlight of regional cooperation is infrastructure connectivity, which guarantees the free flow of goods even at the height of a pandemic.

So far, the Kunming-Bangkok Road, an important infrastructure project under the ASEAN framework and part of the Asian road network, has been running smoothly for more than a decade.

As China-ASEAN cooperation moves from the “golden era” to the “diamond decade,” what’s next for the two economies? 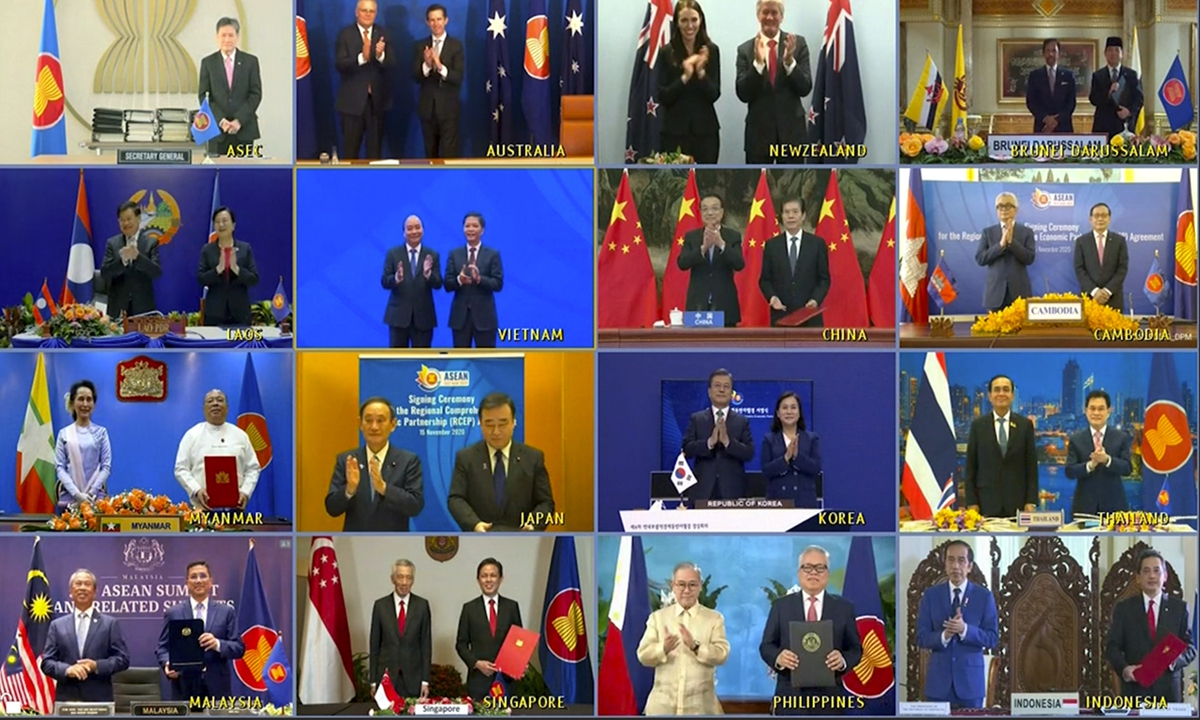 ▲This image made from a teleconference provided by the Vietnam News Agency (VNA) shows the leaders and trade ministers of 15 Regional Comprehensive Economic Partnership (RCEP) countries pose for a virtual group photo in Hanoi, Vietnam on Sunday. Photo: AP

With tariff barriers to be removed after the RCEP takes effect, China may import more fruits and raw materials from ASEAN countries and export more of its textile, mechanical and electrical products to the bloc, further fueling bilateral trade, according to Xu.

Under RCEP, China and ASEAN countries will reduce negative list items for each other, laying the foundation for a more free flow of investment – based on which the region’s industrial chain can integrate and reorganize to prevent the risks of a lengthy process disrupted by the pandemic, he noted.

“Some goods that were supposed to be exported to the US and Europe could also be manufactured and sold within the business circle,” Xu said.

The closer connectivity between China and ASEAN also paves the way for an encompassing logistics circle that could significantly cut current shipping costs.

“In the past, companies in Singapore, Thailand and Malaysia prefer to ship goods to the big ports of Guangzhou and Shanghai. But now direct flights to Guangxi from these countries in tandem with sea-railway combined transportation better connect Southwest China and the ASEAN countries, and therefore, could radiate the huge markets of each other,” He noted.

Also, goods from ASEAN countries could be transferred to Central Asia or Europe via the China-Europe freight railway, industry insiders said.

As the China-ASEAN relations develop in parallel with the issues of the South China Sea, the past 10 years also mark a process of the two economies overcoming geopolitical barriers to reach a peaceful solution with shared responsibility.

In 2013, the history of the conflicting maritime claims in the South China Sea has drawn China-ASEAN relations into setback, but enhanced economic ties and consensus on regional security has then gradually repaired the dampened mutual trust.

In recent years, China and ASEAN have established an inter-governmental consultation and negotiation mechanism to manage SCS disputes.

China has been working with ASEAN countries to fully and effectively implement the Declaration on the Conduct of Parties in the South China Sea (DOC). And the China-ASEAN Expo embodies another effort by China and ASEAN to maintain regional security and prosperity through pragmatic common goals, and counter the US’ attempts to undermine regional peace, experts said.

“History shows us the common interest linking common culture among us, and the feeling of brotherhood always prevails,” General Chairman of Indonesia’s Great Indonesia Movement Party Sugiono said on Thursday at a dialogue with party officials from ASEAN countries. He appealed that peaceful solutions should be sought via dialogue and friendly consultation.

Xu said that the South China Sea Code of Conduct (COC), which is expected to clarify how regional countries should develop resources in disputed waters and where joint military exercises with external countries could be held, could play an important role in further cementing political mutual trust between China and ASEAN countries. The COC is scheduled to be completed by 2021.

To solidify mutual trust, it is of vital importance for China to strengthen communication with ASEAN countries at this moment, so as to counter the US forming allies and stirring up disputes in the region, Xu added.

In September, Chinese State Councilor and Defense Minister Wei Fenghe visited Malaysia, Indonesia and the Philippines. The visit was partly aimed at safeguarding regional safety and carrying forward negotiations on the COC.