Rescuers set up a tent in Yangbi Yi Autonomous County, southwest China's Yunnan Province, May 22, 2021. At least 3 people were killed and 27 others injured as of 6 a.m. Saturday after a series of earthquakes jolted Yangbi Yi Autonomous County in Dali Bai Autonomous Prefecture, southwest China's Yunnan Province, local authorities said. Four earthquakes over 5.0-magnitude jolted Yangbi from 9 p.m. to 11 p.m. (Beijing Time), according to the China Earthquake Networks Center. Rescue forces have been dispatched to the quake zone, and rescue efforts are underway. (Xinhua)

Four earthquakes over 5.0-magnitude struck Yangbi Yi Autonomous County in Dali Bai Autonomous Prefecture of Yunnan from 9 p.m. to 11 p.m. Friday Beijing Time. The tremors were felt in all 12 counties and cities of the prefecture, with Yangbi being the worst hit.

Hours later at 2:04 a.m. Saturday, a 7.4-magnitude earthquake jolted Maduo County of Golog Tibetan Autonomous Prefecture, according to the China Earthquake Networks Center (CENC). The county is located over 4,000 meters above sea level.

In Yunnan, by 6 a.m. Saturday, three people were killed and 28 others injured, said Li Zepeng, deputy head of the prefecture, at a press briefing on Saturday morning, adding that a large number of houses and facilities were damaged in the areas hit by the quake.

The prefecture of Dali also set up an earthquake relief headquarters, sending nine teams to nine villages and towns to carry out relief work.

So far, over 16,200 rescuers and relief materials including tents and daily necessities have been dispatched to the quake area. Over 22 million yuan (about 3.4 million U.S. dollars) has been allocated for emergency relief.

Yangbi has arranged 380 centralized settlement sites for over 85,000 affected people.

Strong tremors were felt by residents in provincial capital Xining, which is 385 km away from the county seat of Maduo.

Work teams and well-equipped rescue forces have been immediately dispatched to the quake-hit area.

The earthquake occurred in the sparsely-populated pastoral areas, where brick and wood bungalows are mostly scattered, rescuers said.

At an average altitude of 4,200 meters, Maduo County is located at the source region of the Yellow River with a great number of rivers and lakes.

In the past five years, about 25 earthquakes of magnitude 3 or above have occurred within 200 kilometers of the epicenter, the largest of which occured Saturday, CENC data showed. Enditem 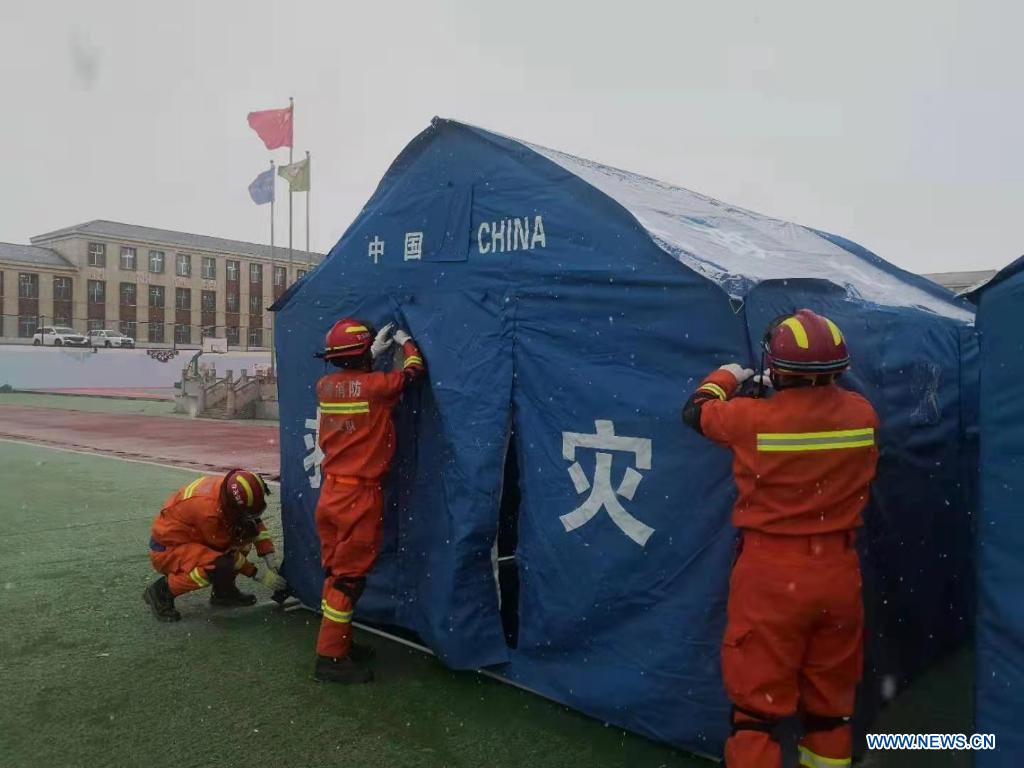