The Long March-5B Y2 rocket, carrying the Tianhe module, blasts off from the Wenchang Spacecraft Launch Site in south China's Hainan Province, April 29, 2021. China on Thursday sent into space the core module of its space station, kicking off a series of key launch missions that aim to complete the construction of the station by the end of next year. (Xinhua/Ju Zhenhua)

WENCHANG, Hainan, April 29 (Xinhua) — China on Thursday sent into space the core module of its space station, kicking off a series of key launch missions that aim to complete the construction of the station by the end of next year.

The Long March-5B Y2 rocket, carrying the Tianhe module, blasted off from the Wenchang Spacecraft Launch Site on the coast of the southern island province of Hainan at 11:23 a.m. (Beijing Time).

About 494 seconds later, Tianhe separated from the rocket and entered the planned orbit. At 12:36 p.m., its solar panels unfolded and started to work properly.

The successful launch of the core module marks that China’s space station construction has entered the full implementation stage, which lays a solid foundation for the follow-up tasks, said Chinese President Xi Jinping in a congratulatory message.

On behalf of the Communist Party of China (CPC) Central Committee, the State Council and the Central Military Commission (CMC), Xi, also general secretary of the CPC Central Committee and chairman of the CMC, extended warm congratulations and sincere greetings to all members who have participated in the mission in the message.

Tianhe will act as the management and control hub of the space station Tiangong, meaning Heavenly Palace, with a node that could dock with up to three spacecraft at a time for short stays, or two for long, said Bai Linhou, deputy chief designer of the space station at the China Academy of Space Technology (CAST), under the China Aerospace Science and Technology Corporation.

Tianhe has a total length of 16.6 meters, a maximum diameter of 4.2 meters and a takeoff mass of 22.5 tonnes, and is the largest spacecraft developed by China.

The space station will be a T shape with the core module at the center and a lab capsule on each side. Each module will be over 20 tonnes. When the station docks with both manned and cargo spacecraft, its weight could reach nearly 100 tonnes.

The station will operate in the low-Earth orbit at an altitude from 340 km to 450 km. It has a designed lifespan of 10 years, but experts believe it could last more than 15 years with appropriate maintenance and repairs.

“We will learn how to assemble, operate and maintain large spacecraft in orbit, and we aim to build Tiangong into a state-level space lab supporting the long stay of astronauts and large-scale scientific, technological and application experiments,” said Bai.

“The station is also expected to contribute to the peaceful development and utilization of space resources through international cooperation, as well as to enrich technologies and experience for China’s future explorations into deeper space,” Bai said. 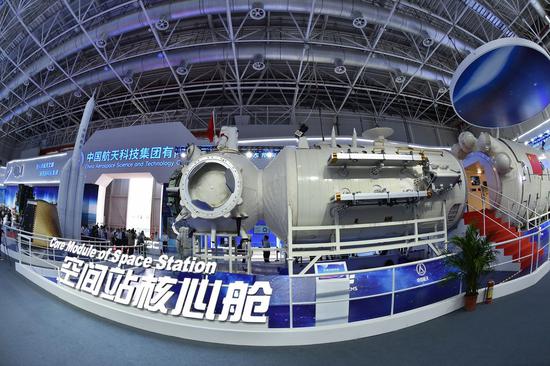 As the foundation of the station, Tianhe will help China’s aerospace engineers carry out the verification of key technologies, including flexible solar wings, in-orbit assembly and maintenance, and above all a new life support system.

China will also send the Tianzhou-2 cargo spacecraft and Shenzhou-12 manned craft this year to dock with the core module. Three astronauts will be aboard Shenzhou-12 and stay in orbit for three months, said Hao Chun, director of the China Manned Space Agency (CMSA).

“We will transport support materials, necessary spare parts and equipment first, and then our crew,” said Hao.

Tianzhou-3 cargo craft and Shenzhou-13 manned spaceship will also be launched later this year to dock with Tianhe, and another three astronauts will then begin their six-month stay in orbit.

The longest stay in space so far by Chinese astronauts is 33 days. “In previous missions, we sent water and oxygen to space along with astronauts. But for a stay of three to six months, water and oxygen would stuff the cargo craft full with no room for other necessary goods and materials. So we installed the core module with a new life support system to recycle urine, exhaled breath condensate (EBC) and carbon dioxide,” said Bai.

With the system, urine can be processed into distilled water, some of which can be used for toilet flushing and the rest, together with the collected EBC water, can be further purified for electrolytic oxygen generation and experiments, said Cui Guangzhi, a designer of the urine treatment system, a sub-system of the life support system, with the Second Institute of the China Aerospace Science and Industry Corporation Limited (CASIC).

“The recycling of water can reduce the load burden of cargo craft and greatly cut the operating cost of the space station,” Cui said.

Bai Linhou stressed the life support system was challenging. “It has never been used in China’s previous space missions. The different gravity environment in space makes it hard to perfect the technology on the ground.”

“The life support technology is a must for astronauts to stay on the moon or explore deeper space. We will develop the technology step by step, first recycling water and oxygen in Tiangong, and then planting vegetables and crops in space to gradually realize food self-sufficiency,” Bai added.

After the five launch missions this year, China plans six missions, including the launch of the Wentian and Mengtian lab modules, two cargo spacecraft and two manned spaceships, in 2022 to complete the construction of the space station.

“We have to make sure every launch is reliable and operation of spacecraft in orbit is safe and sound. Every mission is a test for our organization, management, technology and support ability,” said Zhou Jianping, chief designer of China’s manned space program.

The station will offer astronauts more than 100 cubic meters of room for living and working, more than six times that of Tiangong-2 space lab. The core module Tianhe will provide astronauts six zones respectively for work, sleep, sanitation, dining, healthcare and exercise.

If Tiangong-1 and Tiangong-2 are like one-bedroom apartments, the space station is equivalent to an apartment with three bedrooms, a living room, a dining room and a storage room.

Researchers and engineers have also made work and life in space more comfortable and convenient through advanced information and AI technologies.

Astronauts can control cabin lighting and kitchen equipment through handset APP and phone each other or communicate with the ground wirelessly. The large bandwidth can also support transmission of huge amounts of experiment data to the ground.

The faster space-ground network speed will also allow the engineers to upload modified software programs to the space station.

The mechanical arms installed on the space station will help astronauts in their assembly, operation and maintenance work of the station.

The station also has more advanced technologies thanks to the collected wisdom and strength from universities, research institutes and industrial departments across the country.

It will be more energy efficient, with the photoelectric conversion efficiency of its photovoltaic system exceeding 30 percent, and by using electric propulsion rather than conventional chemical propulsion, Zhou said. 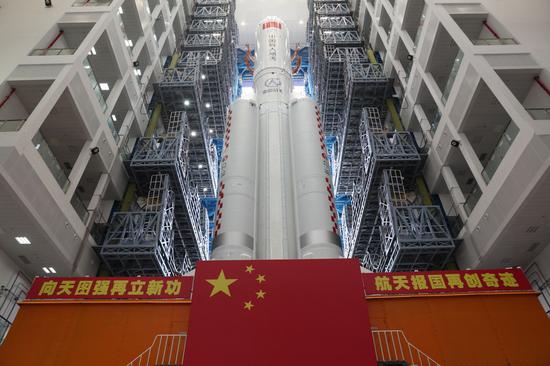 Photo taken on April 23, 2021 shows the combination of the core module of China's space station, Tianhe, and the Long March-5B Y2 rocket being transported to the launching area of the Wenchang Spacecraft Launch Site in south China's Hainan Province. (Photo by Guo Wenbin/Xinhua)

In 1992, China started the manned space program with a three-step strategy. “Progress steadily with systematic and long-term planning – this is a good example of how China does things,” said Zhou.

The first step was to send astronauts into space and return safely. The launches of Shenzhou-5 in 2003 and Shenzhou-6 in 2005 fulfilled the mission.

The second step was to test key technologies needed for a permanent space station, including extra-vehicular activity, orbital docking, and in-orbit propellant refueling.

This phase included the launch of Tiangong-1, a transitional platform to test the docking technology, and the Tiangong-2 space lab.

The third step is to assemble and operate a permanently crewed space station, which will mark a new high in China’s space technology.

Bai Linhou said the station could support at most six astronauts at the same time. Regular launches of crewed and cargo spaceships will secure a long-term manned presence to carry out in-orbit research and services.

Flight engineers and payload experts are among the astronaut reserve for the first time to meet the space station’s maintenance and advanced research needs.

Such a large facility will provide many opportunities for scientific research and technological experiments, said Zhou. “It is bound to enrich our understanding of the universe and promote the development in science, technology, and applications.”

Seed breeding, pharmaceutical research, and development of critical materials in the space station are expected to produce economic benefits. The life support technology and energy technology are also likely to benefit economic and social development.

Hao Chun said the space station would become an excellent platform for popular science education, such as online courses from space and demonstration of space science projects designed by school students.

In June 2013, female astronaut Wang Yaping delivered the country’s first televised science lesson from space to an audience of over 60 million schoolchildren and teachers across China. The class lasted for 40 minutes on basic physics principles and ignited the space dreams of millions of Chinese students. 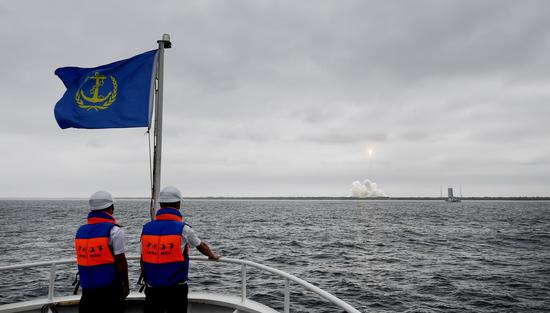 The Long March-5B Y2 rocket, carrying the Tianhe module, blasts off from the Wenchang Spacecraft Launch Site in south China's Hainan Province, April 29, 2021. China on Thursday sent into space the core module of its space station, kicking off a series of key launch missions that aim to complete the construction of the station by the end of next year. (Xinhua/Yang Guanyu)

Since China started to develop its manned space program, it has been carrying out international cooperation with an open attitude by adhering to the principle of peaceful use of space and win-win sharing.

For the space station project, China has extensive exchanges and cooperation with the United Nations Office for Outer Space Affairs (UNOOSA), the European Space Agency, and national space agencies from countries like Germany, Italy, France and Pakistan.

The cooperation has covered multiple fields, including technologies, science research and application, and astronaut selection and training, producing many achievements.

In March 2016, the CMSA and the UNOOSA signed a memorandum of understanding to invite UN member states to conduct scientific experiments aboard the China space station. In May 2018, 27 countries brought forward 42 cooperation proposals after the two agencies sent out the invitation. 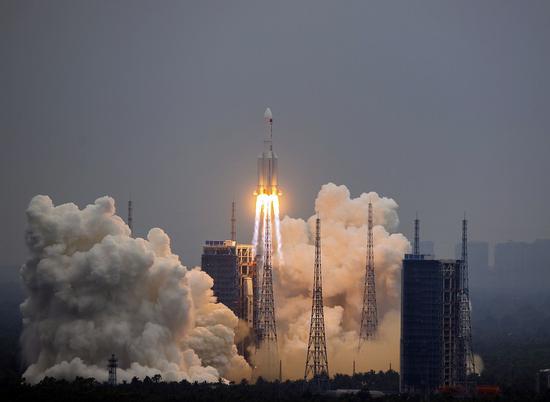 The Long March-5B Y2 rocket, carrying the Tianhe module, blasts off from the Wenchang Spacecraft Launch Site in south China's Hainan Province, April 29, 2021. China on Thursday sent into space the core module of its space station, kicking off a series of key launch missions that aim to complete the construction of the station by the end of next year. (Xinhua/Zhou Jiayi)

According to Hao, the research projects are being carried out as planned, and China will continue to solicit cooperation projects globally with the UNOOSA.

The payloads at the space station will be updated constantly, explained Bai. Cargo spaceships will send new payloads and remove the old, ensuring continuous opportunities for new international projects.

He said many foreign space agencies had brought up cooperative intentions, and China will start the selection of foreign astronauts and carry out joint flights according to the mission progress.

“Through cooperation, we want to build China’s space station into a scientific research platform shared by the world and benefiting all humankind,” Hao said.