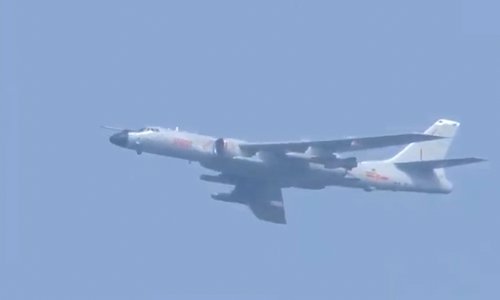 ▲China’s latest H-6N bombers fly in formation across the sky above Tiananmen Square in Beijing during the National Day parade on October 1, 2019. Photo: CCTV

The Chinese People’s Liberation Army (PLA) Air Force’s latest bomber, the H-6N, was recently spotted carrying what seems to be a ballistic missile with a hypersonic warhead, overseas  media reported. This new capability will enable the H-6N to become a real strategic bomber capable of covering the entire Indo-Pacific region with air strikes against which there is no defense, Chinese analysts said on Tuesday.

A video circulating on Chinese and overseas social media platforms over the weekend showed an H-6N landing at an unidentified airbase. The bomber carried a new missile resembling the shape of the DF-17, a hypersonic ballistic missile first showcased to the general public at the National Day parade in Beijing on October 1, 2019, under its belly, the Hong Kong-based South China Morning Post reported on Monday.

Citing a screenshot of the video, media on the island of Taiwan said that the missile is about 13 meters long and has a diameter of about 1 meter.

US news website thedrive.com also gave coverage to the video. It said that the massive weapon’s unique wedge-shaped profile of its forward section points to the possibility that the missile is a hypersonic weapon system.

Compared with its predecessor the H-6K, the H-6N can carry more fuel and can receive aerial refueling, which could greatly extend its operational radius and range, transforming it from a medium- to long-range bomber to a long-range strategic bomber, Fu Qianshao, a Chinese military aviation expert, told the Global Times on Tuesday.

When equipped with long-range, air-launched ballistic missiles, the H-6N can gain greater attack range and defense penetration capabilities compared with traditional cruise missiles that fly at subsonic speeds, Fu said, noting that this kind of attack cannot be intercepted.

The combination of the H-6N and ballistic missiles can cover the entire Indo-Pacific region, Fu said. US military bases on Guam and Wake Island will be within range, thedrive.com reported.