▲Visitors tour the Military Museum of the Chinese People’s Revolution in Beijing on the first day of a special exhibition marking the 70th anniversary of the CPV army’s participation in the War to Resist US Aggression and Aid Korea on Sunday. Photo: Li Hao/GT

The Military Museum of the Chinese People’s Revolution in Beijing, the country’s capital city, was full to the brim on Sunday with thousands of local residents and tourists who eagerly visited an exhibition commemorating the war in which China defeated US aggression in the Korean Peninsula 70 years ago.

The desire among the Chinese public in recent days to commemorate the war, mourn the martyrs and show their respect to the veterans shows that the most treasured legacy of the war – the spirit – has been inherited through the generations. It is a spirit that continues to empower the nation in overcoming its difficulties, especially the challenges from a powerful hostile hegemonic superpower and the huge obstacles on the path of development today, Chinese experts said.

The solemn commemorations in China this year have reinforced the historical narrative over the nature of the justice for this war, and have swept aside wrong interpretations that sought to question the necessity of the war and downplay the significance of the Chinese People’s Volunteers’ (CPV) sacrifices, said analysts. As Chinese people are feeling similar emotions as the people sensed 70 years ago of US arrogance, bullying and hostility, the commemoration is encouraging the Chinese people to bravely deal with pressures from the US with full confidence.

Since 1951, October 25 has been marked as the Memorial Day of the CPV entering the Democratic People’s Republic of Korea (DPRK) in the War to Resist US Aggression and Aid Korea. On that day in 1950, the CPV fought and won its first battle in the Korean Peninsula against the US-led “UN force” after the CPV entered the peninsula on October 19, 1950 as requested by the DPRK.

The museum was closed on October 5 to prepare the exhibition. On Sunday, the first day it reopened, 8,000 people visited the museum, its maximum capacity.

Many parents brought their children to the exhibition for patriotic education, as the exhibition showcased hundreds of objects including some US weapons captured by the CPV as well as weapons used by the CPV. On display are crucial historic documents like a letter written by Kim Il-sung, founding father of the DPRK, addressed to “Respected Comrade Mao Zedong,” top leader of the People’s Republic of China (PRC), and asking for assistance and reinforcements from China.

Some CPV veterans were at the museum with their families. The visitors showed their respect to the veterans and asked for group photos. 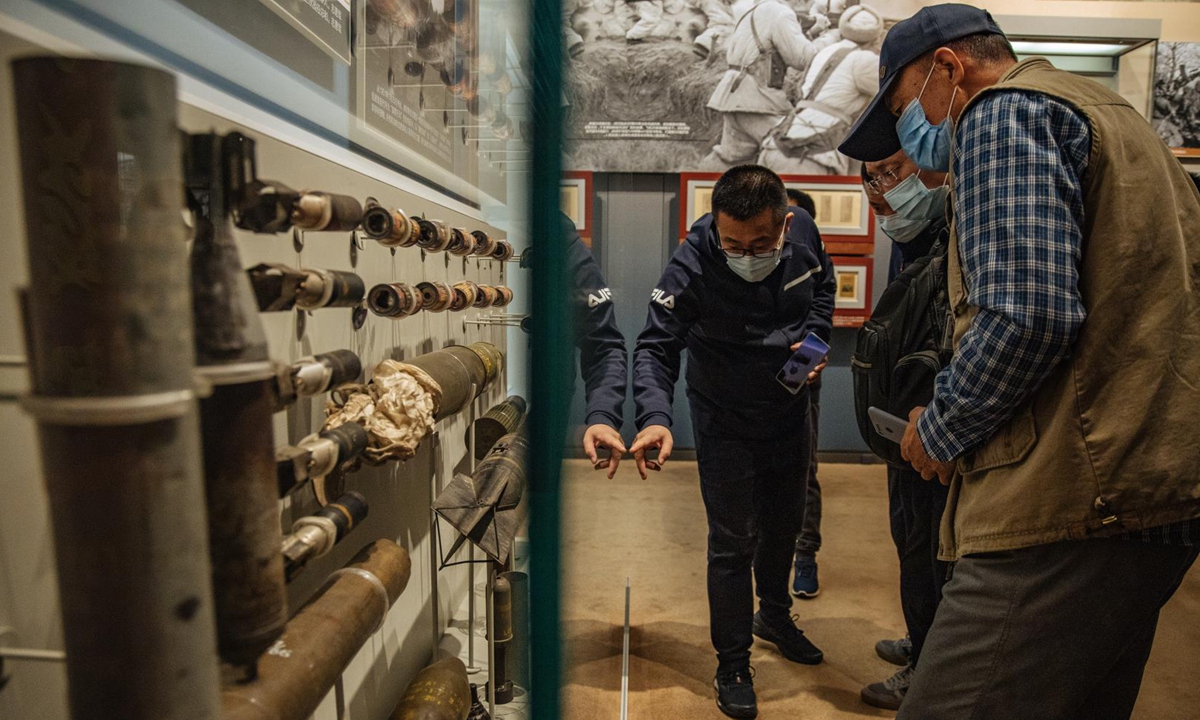 Chinese President Xi Jinping and other Communist Party of China and state leaders visited the exhibition on October 19. Xi stressed carrying forward into the new era the great spirit demonstrated by the CPV in the war, and striving to achieve national rejuvenation.

A visitor surnamed Li who brought his son to the museum on Sunday said it was a valuable opportunity not only for the children, but for everyone to relearn the history of the war.

“After seeing the whole exhibition, I found the survival of the PRC and the peace of the region is truly hard-won,” he said.

Lü Chao, a research fellow at the Liaoning Academy of Social Sciences, told the Global Times on Sunday that many cities in Northeast China, the Chinese territory bordering the Korean Peninsula, are also observing solemn commemorations as people of the region have particular emotions about the war.

“Many seniors in provinces like Liaoning and Jilin in Northeast China participated in the war by not just serving in army but also providing supplies to the frontline and other logistics tasks. This is a special memory for the people here.”

The nationwide commemoration was reflected at the Chinese box office. The Sacrifice, a war film that commemorates the war, grossed more 316 million yuan ($47.26 million) by Sunday after its release on Friday.

Cheng Xiaohe, an associate professor at the Renmin University of China in Beijing, told the Global Times that a key reason why Chinese people are so enthusiastic now is because of the similarities between 1950 and 2020.

“In the past few years, the US has been increasingly hostile against China, and has taken actions to harm China’s interests, including interfering in the Taiwan question, unfairly sanctioning Chinese firms and launching racist and stigmatizing propaganda warfare against China since the COVID-19 pandemic began this year,” Cheng said.

These prompted a rethink about 1950, the year that the US ignored China’s warning not to expand the war to China’s border, he noted.

“The spirit of the war is the most treasured legacy of the war. It can continually encourage and empower Chinese people to overcome difficulties and solve serious problems, especially the challenges from a hegemonic superpower that has more strength than China,” Lü said.

How will China’s exports sustain growth momentum in 2021?