“Japan has Gundam and the U.S. has Transformers. It will be embarrassing if China, with an abundance of excellent legends and cultures, do not have a similar product,” said Yin Dajiang, a designer of the wearable suit armor from northwest China’s Shaanxi Province, adding that he hopes to combine Chinese elements to the design, highlighting Chinese culture. Yin Dajiang tries on the suit or armor. (Photo/Dang Tianye)

Yin, a big fan of classical cartoon movies such as “Journey to the West” and “Transformers” since he was a child, has cultivated a strong interest in suits of armor and various models, once even assembling small pieces of the suits to amuse himself in his spare time.

Several years ago, Yin was acquainted with Xin Qidong, also an enthusiast of wearable armor born after the 90s. They hit it off, immediately deciding to set up a studio of Chinese-style armor. Yin and Xin’s wearable armor, although appearing to be metal, are manufactured with high-density environmental-friendly parts and fittings. For a two-meter-high mobile suit, the weight can be reduced to about 20 kilograms, easy for manipulation and control.

Four years ago, after the founding of the studio, wearable armor produced by the team gained some fame after their frequent appearances in anime expo and commercial performance activities. The number of team members has grown from two to over a dozen. Although the business is growing, Yin and Xin still cherish their dreams of expanding the influence of China’s wearable suits of armor: Yin sometimes wears the armor of the Monkey King, a Chinese trickster god, on school campuses to disseminate the Chinese elements, while Xin is dedicated to design more original works.

“It would be so cool if, in the future, foreigners would become interested in Chinese classics or fairy tales due to their love for our Chinese suits of armor,” said Xin. 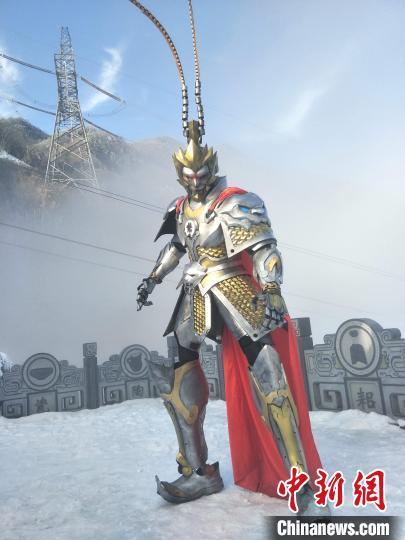 Photo shows the mobile suit of the Monkey King, a Chinese trickster god. (Photo provided by the interviewee)