▲The fifth plenary session of the 19th Central Committee of the Communist Party of China (CPC) is held in Beijing, capital of China, from Oct 26 to 29, 2020.Photo:Xinhua

The Communist Party of China (CPC) vowed to grasp new opportunities as the country is in a major strategic development period, although both opportunities and challenges the country faces have changed, reads the communique of the fifth plenary session of the 19th CPC Central Committee released on Thursday.

The communique was passed at the session in Beijing held from Monday to Thursday.

Chinese political observers noted that this is a key meeting for the country’s development, which sets medium and long-term goals for the next five and 15 years. It is also a key deployment to ensure the great rejuvenation of the Chinese nation, which is an tough and arduous process.

The plenum analyzed the profound and complex changes in China’s development environment. It concluded that the world is undergoing major changes unseen in a century. A new round of scientific and technological revolution and industrial transformation is being evolved and developed.

The balance of international forces has adjusted, but peace and development are still the themes of the times. The concept of a community with a shared future for mankind is deeply rooted in the hearts of the people, but the uncertainties in international community have increased significantly.

But at the same time, the problem of inadequate development in China remains prominent, and the reform tasks in key areas are still arduous. For example, the innovation ability does not meet the requirements of high-quality development, agricultural foundation is unstable, the gap between urban and rural regional development and income distribution is large, ecological and environmental protection has a long way to go, and there are shortcomings in the livelihood guarantee and weaknesses in social governance. 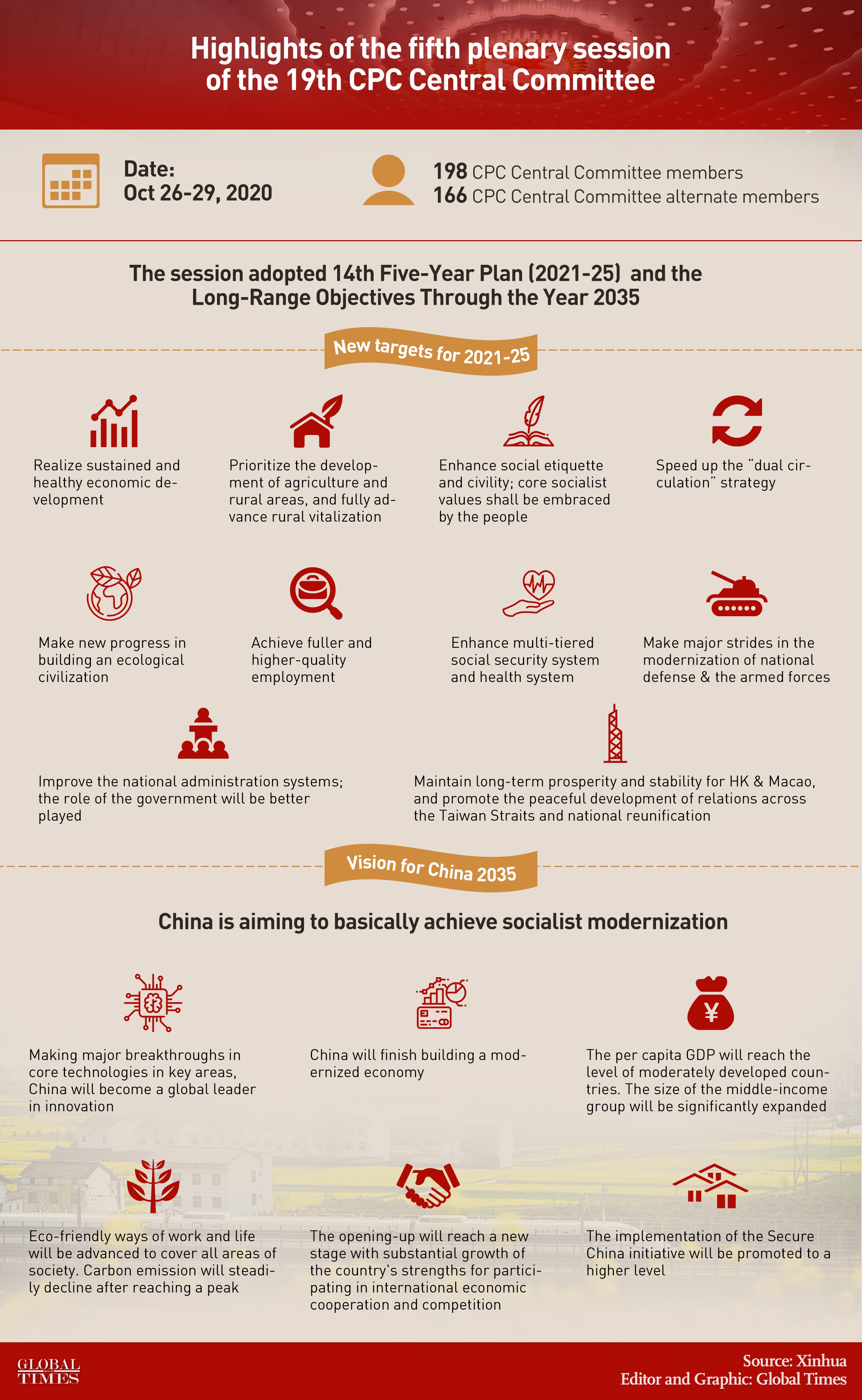 “The comprehensive analysis on current changes, advantages and challenges shows that the country is increasing its awareness of problems, Yang Xuedong, a professor of political science at Tsinghua University, told the Global Times on Thursday.

“As the world faces the COVID-19 pandemic, with no end in sight in the next few years, coping with the increasingly complex and vicious international environment where some countries have been dedicated to containing China’s rise, it is of great importance to cultivate such awareness to embrace instability and uncertainties and grasp new opportunities,” Yang said.

Experts reached by the Global Times on Thursday pointed out that to achieve the prospect in 2035, which is a key step to realizing the great rejuvenation by 2050, China should grasp the major strategic development period.

Yang said that he is confident China will be able to fulfill the prospect, as the country has accumulated systematic, economic and social advantages over the past decades’ development.

He believes that the CPC serves as a strong leader to gather all those advantages and integrate those resources into “engines” of rapid development.

The enthusiasm and creativity floating among the general public also props up China to realize the vision set for 2035, Yang said.

Lin Liming, a research fellow at the China Institutes of Contemporary International Relations in Beijing, pointed out that “the experiences in curbing COVID-19 have shown the international community its institutional advantages, especially in the public health sector. It also helps to boost the Chinese people’s confidence.

Lin predicted that it may help China catch up with the US in terms of GDP earlier than the previously expected 2027.

Another opportunity for China is the increasingly active role in leading high-end technologies such as 5G, artificial intelligence, and high-speed bullet trains, he said.

Analysts also suggested that grasping the period, China could construct a value network in Asia with China as the center, especially in improving its political and military influence.