LHASA, Dec. 2 (Xinhua) — Deqen Wangmo, a student of Lhasa No.8 Middle School in China’s Tibet Autonomous Region, couldn’t be happier. Since education funding increased during this year’s fall semester, school meals are even better than before. But the benefits extend far beyond the lunch table.

“We now get milk in between lessons,” said Deqen. “And the school also provides us with stationery, which means our families don’t have to buy these items.”

The funding is a preferential educational subsidy policy carried out specifically for Tibet Autonomous Region. It was designed to benefit students from rural farming and pastoral backgrounds as well as underprivileged students from urban areas, covering any tuition fees, and all food and board from pre-school to senior high school.

Schools in the region are entitled to an average annual subsidy of 4,200 yuan (about 640 U.S. dollars) per student, 14 times more than that of 1985 when free education was first introduced, according to the latest data from the regional department of education. 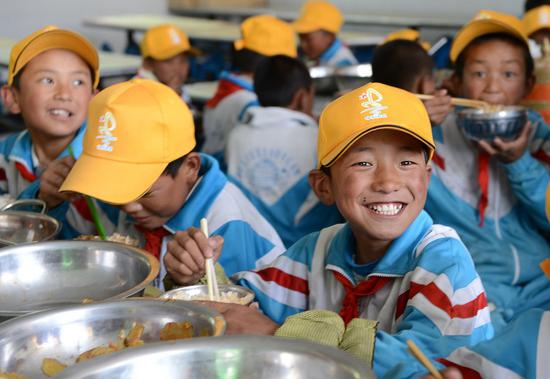 By shifting the financial burden of supporting students from families to the government, the prospects of children from farming, pastoral and underprivileged backgrounds have radically changed, said Prof. Bagor from Tibet Vocational Technical College, adding that the quality of education across the region has vastly improved, too.

Students across all grades can also access additional support through a number of projects and initiatives under 40 educational aid projects, providing grants and scholarships, among others.

Before the peaceful liberation of Tibet in 1951, the enrollment rate of school-age children was less than two percent while the illiteracy rate was as high as 95 percent.

Today, the region’s latest gross student enrollment rate data shows how much has been achieved. Tibet now has 84.42 percent of pre-school students in education; 99.71 percent in primary school, 102.88 percent in middle school (it is over 100 percent due to those starting education late or having to repear academic years), 86.62 percent in senior high and 47.65 percent studying at college or university.

Odser Lhamo, 73, who lived under serfdom for 12 years, was among the first generation to benefit from Tibet’s educational policies.

After democratic reform in Tibet in 1959, she was able to enroll in today’s Xizang Minzu University. She went on to work at a local court after graduation and now receives a monthly pension. These opportunities would have been unimaginable for a person of her background in the past.

Deeply inspired by Odser’s story, many years later, her grandson enrolled at the same university, with his studies assisted by a monthly learning grant.

Odser and her grandson are not alone.

For the students of today and future generations, the educational policies in Tibet, in Odser’s words, are “life changing.”