For some anti-China forces, cotton has become the latest tool to hype “forced labor” topics in Northwest China’s Xinjiang Uygur Autonomous Region. Citing a report of the infamous “scholar” Adrian Zenz, the BBC accused China of “forcing” Uygurs and people of other ethnic minority groups to pick cotton by hand. However, by visiting cotton farms and interviewing people working in cotton-related fields in southern Xinjiang, the Global Times found that machines have been widely applied in cotton planting and harvesting, with fewer workers needed, and there is no “forced labor” in related industries in Xinjiang.

In a report released on December 15, the BBC claimed that “New evidence suggests that upwards of half a million minority workers a year are being marshalled into seasonal cotton picking under conditions that again appear to raise a high risk of coercion.”

The report cited the anti-China “scholar” Adrian Zenz’s new “finding,” which claimed that 70 percent of the cotton plantations in Xinjiang in 2019 were harvested by human labor, and Uygurs and people of ethnic minority groups were forced to pick cotton for factories including for the Xinjiang Production and Construction Corps (XPCC).

As Zenz has been exposed as a backbone for an anti-China institute manipulated by US intelligence agencies, his latest report on cotton picking as well as his previous reports on China’s Xinjiang have been found to be full of loopholes and lies.

For example, data released by the agriculture department of Xinjiang in 2020 showed that the total cotton plantation area in Xinjiang reached 24.19 million mu (1.6 million hectares) and around 16.90 million mu were harvested by machines, accounting for 70 percent of the plantation area. Also, 95 percent of the cotton in northern Xinjiang was harvested by machines and the mechanization rate in southern Xinjiang has increased steadily.

Without even verifying Zenz’s report or talking to people in cotton farming, the BBC cited Zenz’s conclusion in its report and accused China of using forced labors in cotton picking, which contradicts the facts.

The Global Times found that in line with the latest data in 2020, the mechanization rates of Xinjiang’s cotton planting and harvesting have highly increased in recent years, and the need for cotton-pickers during the harvest season from around mid-September to December has greatly declined.

Li Chengjun, manager of the Taichang Agriculture Development Co in the Bayingolin Mongolian Autonomous Prefecture, has been working in cotton plantations for 12 years, and he told the Global Times that since 2015, machines have been widely used in harvesting cotton. The mechanization rate of cotton planation in the XPCC was higher.

“Before 2016, lots of cotton pickers were needed in Xinjiang during the harvest season. Sometimes it took as many as 3,000 people from other provinces, including Henan and Sichuan, to pick the cotton. Currently, a John Deere machine can harvest cotton on 400 mu within one day. We own more than 60,000 mu of cotton, which took 15 days for several machines to harvest 85 percent of the cotton, Li said.

Li said that it usually takes only 100 workers to pick the left cotton from places where machines cannot get through.

Gao Ruinan, a manager from Haoxing Textile Co, told the Global Times that his company has been buying cotton from the XPCC for many years, and the cooperation mechanization started earlier than other places in Xinjiang. More than 90 percent of its cotton has been harvested by machines and some places have achieved 100-percent mechanization. 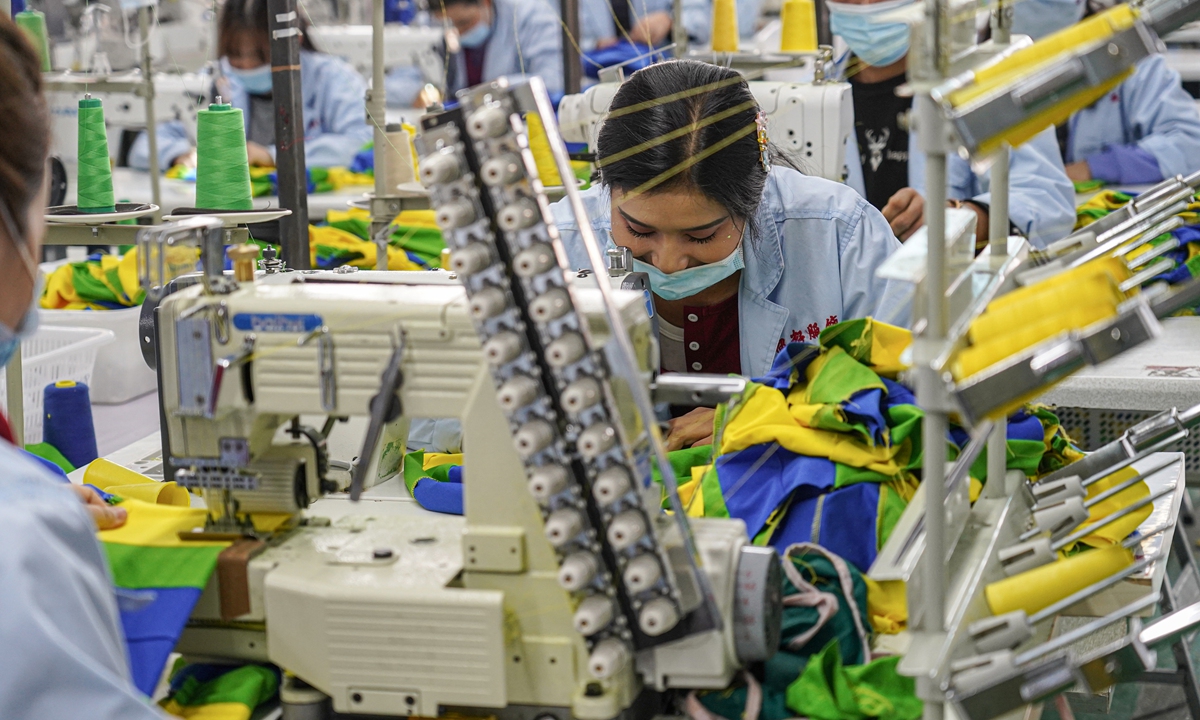 ▲A worker in the Pomegranate Seed Garment Co. in Northwest China’s Xinjiang Uygur Autonomous Region agrees to have her photo taken. Photo:Yang Ruoyu/GT

Aside from factual mistakes, the BBC’s report contains lots of guesswork. For example, it claimed that “the parallel purpose of mass employment and mass internment is made clear by the appearance of many factories within the walls of the camps, or in close proximity to them.”

It also posted satellite images of a factory in Kucha of Aksu prefecture to show that the education centers and factory have “been amalgamated into one large factory complex.”

The Global Times went to the factory that appeared in the BBC report. Huang Bingyou, chief manager of Pomegranate Seed Garment Co, told the Global Times that trainees in Xinjiang’s education and training centers had graduated in 2019.

“We are a normal factory with all the managing people hired from other cities in China, not deployed by the government,” Huang said.

The BBC report also claimed that its reporters including John Sudworth were “stopped” when “filming the perimeter of the complex.” Sudworth and his team released video footage of them arguing with some people outside the factory. Film of a man who tried to cover the camera was uploaded online, and the BBC said that although they filmed in public areas, they were stopped by “officials.”

The Global Times learned details of people who involved with the incident, which showed a story that BBC did not tell.

“They totally distorted the facts!” said Jiang Yong, the man who tried to cover the BBC’s camera. Jiang is not an “official” as the BBC claimed but the deputy manager and head of the logistics department of the Pomegranate Seed Garment Co.

“On November 19, our security guard found some foreigners had brought a camera to take videos of our factory and they reported the situation to me. I went to them to tell them to stop filming but they immediately turned the camera toward me. As a manager of the factory, I have a responsibility to protect the security of the factory and as an individual, I also have the right to protect my image, right?” Jiang told the Global Times.

Liang Qiting, who is a deputy director of the logistics department of the factory and who was at the site when the incident happened, told the Global Times that when he asked the foreigners what they were doing outside the factory, they answered arrogantly “what are you doing?”

“They slid me a sideways glance and their arrogant attitude made me feel uncomfortable and disrespected,” Liang said.

Both Jiang and Liang said that the foreigners could provide no certificates for their “reporter” identity. Neither had they applied to the factory for an interview. The factory called the police about the incident.

Jiang told the Global Times that these foreigners continuously claimed that they had the right to film in public areas. “It is ridiculous! They stand a dozen miles away from my factory and take a camera to peer into it. In their logic, if the place is not the factory but my house, they can also film from a public area into my house when I am having a bath.”

What angers Jiang the most is that one of the foreigners promised that his image would not appear in any platform. But after the BBC released its report, the picture of him covering the camera was used and was misinterpreted as a local official preventing an interview.

These foreigners said that stopping them filming was “suspicious.” Jiang thought it was “ridiculous.”

“We have nothing to hide and people in our factory are working. I was angry because we used to see some foreign media sneak around and take pictures and make groundless slander,” he said. 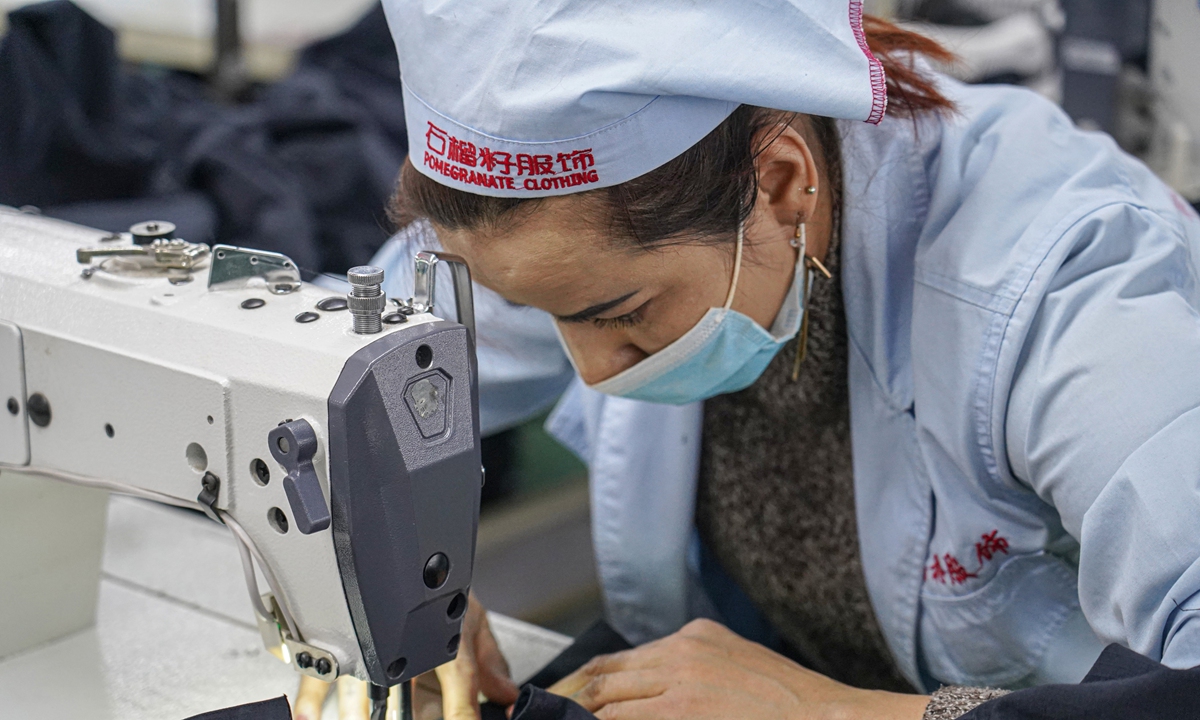 ▲A worker in the Pomegranate Seed Garment Co. in Northwest China’s Xinjiang Uygur Autonomous Region agrees to have her photo taken. Photo:Yang Ruoyu/GT

The factory was founded in March and its main business is to make school uniforms, bags and suitcases. Most of its orders are from Xinjiang.

Aliye Ababekri is a 23-year-old woman working in the factory. She told the Global Times that this is her first job and her current monthly salary is 2,500 yuan ($382), which is expected to increase soon. She said that the job helps her achieve a dream from childhood – to learn clothing design.

The factory offers accommodation for its employees. Renagul Guhalm showed the Global Times her shared dormitory nearby the factory. She shares a fully equipped apartment with five other women and they have decorated the walls with paper flowers they cut.

Aside from Aliye and Renagul, workers reached by the Global Times denied the BBC reports that they were “forced” to work in the factory. Some workers were introduced by friends or family members, and others found recruitment information from the local labor market.

Huang Bingyou, chief manager of the factory, also refuted the BBC’s claims of the government mobilizing and organizing labor for the factory.

Huang said that when the factory was founded, it posted recruitment ads in nearby villages and placed a worker in each village for liaison. The factory’s employees can choose to live in their own houses or the dormitory. They first recruited around 1,800 workers and after the early training, more than 500 stayed. The company paid them a salary during the training period.

“There is no such thing as ‘forced labor.’ Actually, we are more worried about employees jumping from our company to other companies after the training,” Huang said.