A dance starts with a scene where a group of young women are on their way to attend a banquet, with clothes and hairdo inspired by royal court style from some 1,300 years ago.

The women act like they are playing musical instruments such as the bamboo flute, hand drum and pipa (four-stringed lute) as they walk through a garden, laughing along the way.

The piece, titled A Tang Dynasty Banquet, which is less than six minutes long, was staged during a gala aired on Henan TV Station on Feb 13 marking Spring Festival, and has since gone viral on social media, viewed more than 500 million times.

Other than the performances of the 14 dancers, viewers are attracted by the combination of live dance with technology like 5G and augmented reality, which supported the display of national treasures such as Court Ladies Preparing Newly Woven Silkby Tang Dynasty (618-907) painter Zhang Xuan and a bone flute with a history of over 8,000 years.

“The performance brings us back to the Tang Dynasty, which is beautiful and amazing. The dancers portray the maids so vividly that it feels as if they are real Tang Dynasty maids from the painting,” one viewer writes on Sina Weibo.

“Supported by technology, the show is like the movie, Night at the Museum, which enables viewers to appreciate great cultural relics in a fresh way,” another viewer writes.

Besides positive comments, some viewers also interpreted the dance piece with cartoon drawings and animation, which garnered attention on social media.

According to the dance’s choreographer, Chen Lin, the production was inspired by the tangsancai, or tricolored glazed pottery, displayed at a museum in Luoyang, especially the figurines of instrument-players and dancers.

“We thought it would be interesting to bring the Tang Dynasty pottery figurines to life and tell their stories onstage, which would also be a creative approach to showcase the treasures. That’s how we started to create the dance piece,” says Chen. 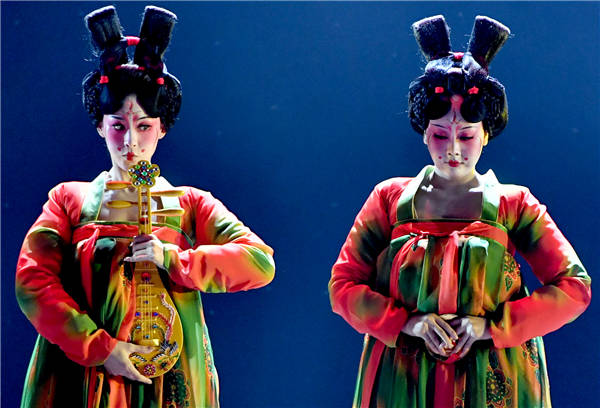 Two of the dancers fully made up and dressed like the women in the original painting. [Photo/Xinhua]