The National Aquatics Center, known as the “Water Cube,” has been converted to the “Ice Cube” and began trial operation on Dec. 21, 2020, according to the Beijing Major Projects Construction Headquarters Office.

More than 800 junior high school students came to the curling venue for the Beijing 2022 Olympic Winter Games on Dec. 21 to experience curling on four standard tracks. The venue will start official operation from Jan. 1, 2021, said Yang Qiyong, general manager of the center.

By the end of March 2021 the public can buy tickets to experience curling at the venue, Yang noted, adding that attendees can spend 30 yuan to throw four to six curling stones.

Special groups, such as teenagers, disabled people, and soldiers, can enjoy a discount, according to Yang.

The center has also arranged professional commentators to show the audience the origin and spirit of curling, the development of the sport in China, and its competition rules. 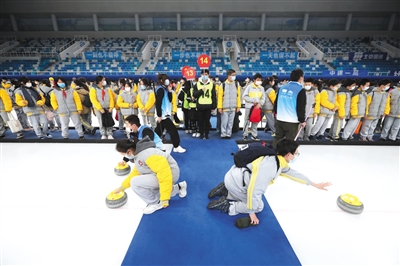 The purpose of the “water-ice conversion” of the center was to build a convertible structure, installing a detachable ice making system in the middle of the competition hall to form a curling field with four standard tracks, said Sun Deyuan, chief engineer of the project undertaken by China Construction First Group Construction & Group Co., Ltd.

It also enables conversion materials to be reused and effectively reduces the transformation cost, according to Sun.

The venue has already completed the “water-ice conversion” twice. During the Beijing 2022 Winter Olympic Games and Paralympic Winter Games, the center will undertake curling and wheelchair curling competitions.

After the Olympic Games, it will continue to switch between swimming season for water sports and ice season for ice sports, becoming a model for sustainable utilization of Olympic venues.