On an ordinary day in December, industrial robots are busy assembling products at a Lenovo plant in Wuhan, capital of central China’s Hubei Province, with a mobile phone or tablet rolling off the production line every second on average.

With a maximum daily capacity of over 140,000 units of mobile phones and tablets, the plant’s quick restoration of production is an epitome of China’s economic resilience and vitality.

The gross domestic product of Hubei Province has recovered to 90 percent of the same period last year during the first three quarters, after losing by nearly 40 percent from January to March.

ONLY MAJOR ECONOMY WITH POSITIVE GROWTH

The COVID-19 epidemic has inevitably dealt a heavy blow to China, with its economy shrinking 6.8 percent in the first quarter. On the day when the statistics were released, President Xi Jinping chaired a leadership meeting and said: “We must stay confident and not be frightened by problems and difficulties.”

“I have said many times that China is a big country with enormous resilience, huge potential and great flexibility in development,” he added.

With the GDP growth reaching 3.2 percent and 4.9 percent in the second and third quarters, the world’s second-largest economy completed the upward leg of a V-shaped recovery.

China’s key economic indicators for the first 11 months unveiled Tuesday showed strengthening recovery, as fixed-asset investment by the private sector registered the first growth this year, and the retail sales of consumer goods sustained upward momentum since the major consumption gauge posted its first positive growth in August this year.

The Organization for Economic Cooperation and Development projected that China is expected to post a 1.8-percent growth in 2020, the only major economy to record positive performance.

In this extraordinary year, Xi has charted the course for the country’s high-quality development and for the country to eradicate poverty and achieve a moderately prosperous society in all respects. 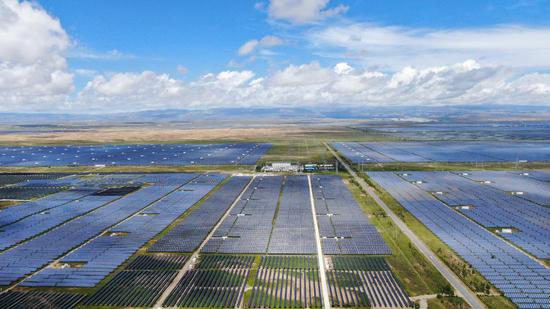 Since February, Xi has been giving instructions on stabilizing the economy. He visited villages, rural families and businesses on inspection tours to coordinate regular epidemic control with economic and social development.

In Zhejiang Province, Xi chatted with workers, asking if their return to work had gone smoothly. In Shanxi Province, Xi called on businesses to make up for the lost time.

Hence, China has set no specific target for economic growth this year but made practical plans to ensure more than 9 million new urban jobs, give full play to the market entities and improve people’s livelihoods.

Data showed that a total of 10.99 million new urban jobs were created in the first 11 months, completing the task for the whole year ahead of schedule.

At a symposium with entrepreneurs in July, Xi urged further efforts to spur the vitality of market entities and motivated them to not only survive but also thrive. He said China will continue with measures to cut taxes, fees, rents and interest rates to ensure the various aid measures benefit market entities directly.

Under Xi’s leadership, as the last nine counties in Guizhou Province were removed from the poverty list in November, “victory is in sight” for building a moderately prosperous society in all respects.

On dealing with the impact of the COVID-19 epidemic on the economy, Xi stressed creating a new development paradigm in which domestic and foreign markets can boost each other, with the domestic market as the mainstay.

By fostering the new paradigm, China is not pursuing a closed-door circulation, but open and mutually reinforcing domestic and international circulations, analysts said.

“Our aim is to turn the China market into a market for the world, a market shared by all and a market accessible to all,” Xi said while delivering a keynote speech via video at the opening ceremony of the third China International Import Expo.

Amid the efforts to open its door wider, the country rolled out a master plan in June on building the southern island province of Hainan into a globally influential free trade port, and subsequently opened three new free trade zones (FTZs) in Beijing, Hunan and Anhui in September, increasing the total number of FTZs in the country to 21.

Despite unstable and uncertain factors in the external environment, China’s foreign trade of goods rose 1.8 percent year on year in the first 11 months, while foreign direct investment into the Chinese mainland, in actual use, expanded 6.3 percent year on year.

With new steps to be taken in reform and opening up, China will further improve its socialist market economy and basically complete the building of a high-standard market system over the 14th Five-year Plan (2021-2015) period, according to a blueprint passed at the fifth plenary session of the 19th Communist Party of China Central Committee in October.