“Don’t say you have not been forewarned!” The Chinese phrase, which has been used by the Chinese mainland previously before going to war, reappeared on Thursday in a commentary posted on the flagship newspaper of the Communist Party of China, the People’s Daily. The commentary demanded that Taiwan intelligence organs stand on the right side of history, and not to serve the Trump administration to create any “October Surprise” before the November US presidential election.

“People on either side of the Taiwan Straits are not willing to see war. But if one day war breaks out, Taiwan secessionists would be the chief criminal,” reads the article bylined  “An Ping,” who some observers believe represents the voice of the mainland’s state security agency.

The article was published online after the mainland state security agency revealed selected Taiwan espionage cases that it has cracked down recently.

Observers from the mainland said that as the Trump administration is likely to create the “October Surprise” by playing “the Taiwan card” to challenge China’s bottom line to serve its reelection, and the Democratic Progressive Party (DPP) of Taiwan with separatist stance is likely to use this as an opportunity to push secessionism, the article published on Thursday could be regarded as a solemn warning to not only the Taiwan authority but also the US.

On the same day, the People’s Liberation Army (PLA) aircraft also reportedly appeared in the “airspace of Taiwan,” and a charter plane carrying Taiwan military men was rejected and forced to return by the management authority at Hong Kong’s flight information region in the South China Sea. This showed increasing tensions and a complicated situation between the mainland and the island of Taiwan.

US military presence has also compounded the situation. The PLA Eastern Theater Command organized naval and air forces, and monitored the USS Barry destroyer when the US warship sailed through the Taiwan Straits on Wednesday, the command announced on Thursday.

“We urge Taiwan intelligence organs not to be kidnapped by the chariot driven by Taiwan secessionists traveling to the dead end,” which will run to only one destination – that is to be smashed and ruined, the commentary said.

“We solemnly warn die-hard extreme Taiwan secessionists” in the island’s intelligence organs who have threatened national security and conducted secessionist activities that the state security agency of the mainland will firmly track and chase them, the article said, stressing that “hopefully, these extremists can learn the trend and stop their wrongdoings rather than stubbornly seeking a path to a dead end. Don’t say you have not been forewarned.”

Over the years, the DPP authority on the island of Taiwan has ganged up with the US and gradually pushed Taiwan separatism. The latest US arms sale to Taiwan also betrayed Tsai Ing-wen’s promise of peace and a softer tune in her October 10 speech.

Reuters reported on Tuesday that the White House is moving forward with three sales of advanced weapons to Taiwan.

Apart from arms sales, foreign media also predicted that the Trump administration could make more risky moves before the November election. Japanese media reported that US President Donald Trump is likely to visit Taiwan in a desperate attempt to get reelected.

Diao Daming, an associate professor at the Renmin University of China, told the Global Times on Thursday that the possibility is remote, but some conservative Republicans are pushing for US Secretary of State Mike Pompeo’s Taiwan tour.

“Whether the conflicts [in the Taiwan Straits] would happen depend on the US,” said Chang Ya-chung, a professor with a Taiwan-based university.

The People’s Daily’s commentary also noted that the mainland’s door of communication and exchange is always open to compatriots across the Taiwan Straits, and it welcomes cooperation in all fields and forms, making clear that the commentary is not aimed at all Taiwan residents. 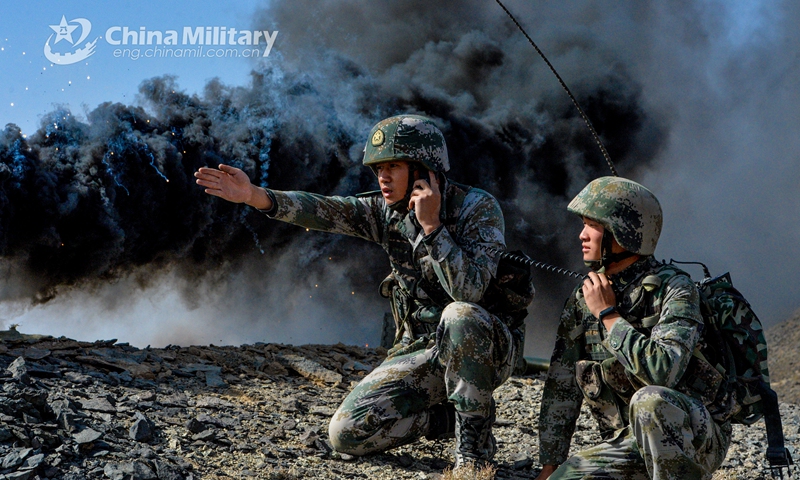 ▲A commanding soldier assigned to a combined arms brigade under the PLA 76th Group Army gives instructions during a real-combat drill on September 26, 2020, which aims to beef up soldiers’ courage and uprightness in battlefield. (eng.chinamil.com.cn/Photo by Zhang Yongqiang)

Chang said the mainland’s move on the crackdown of Taiwan spies also shows the disappointment with its Kuomintang (KMT), because KMT is shifting its stance from pro-reunification to pro-US.

Some KMT members on the island have proposed restoring diplomatic relations with the US, and even removing the “China” from the party’s official name, the Kuomintang of China, or the Nationalist Party of China, Taiwan media reported.

The People’s Daily article also told Taiwan intelligence organ agents who support reunification that the mainland would cooperate with them, welcome them to the mainland, and urge them to oppose separatism.

By colluding with the US, the DPP authority has set obstacles to reunification, including politics, social system, economics and law, experts said, stressing that the mainland will not give up the possibility of a peaceful reunification, but will also prepare for war in the worst scenario.

As for the DPP authority, whose nerves have been strained due to PLA patrols and dissent from Taiwan people after allowing ractopamine-enhanced pork from US in exchange for “political benefits,” has purchased arms worth $800 million from the US twice amid the pandemic.

The collusion between the US populist right-wing and the pro-secessionism Taiwan forces have forced Beijing to make countermeasures, which have reached war-like intensity, an expert said.

Wang Jianmin, a Taiwan affairs expert at the Chinese Academy of Social Sciences, told the Global Times on Thursday that China should also pay close attention to what the US does, knowing how erratic the Trump administration is.

The DPP authority tries to regionalize the cross-Straits relations, and to bring the US and Japan into China’s internal affairs, Wang said.

We hope the US could understand the determination of the Chinese people to maintain national unity and territorial integrity, the expert said.

Newspaper headline: Mainland warns Taiwan not to be part of ‘Oct Surprise’