Incense maker Lu Wen, 38, lights a stick of incense during a workshop in Lanzhou, Gansu province. She has so far re-created 108 kinds of incense that had once been used in China’s royal courts based on recipes found in a classic book on the history of incense written during the Ming Dynasty (1368-1644). CHINA DAILY

Incense smoke, coiling lazily upward, can evoke memories, induce a feeling of relaxation and even take our minds to places we’ve never been to. The burning stick is reminiscent of another time, another place－as the song goes, “the images unwind… in the windmills of our mind”. Incense maker Lu Wen believes history is not just words on paper, but that it can come alive in the imagination triggered by smell.

The 38-year-old perfumer in Lanzhou, Gansu province, has so far re-created 108 kinds of incense that had once been used in China’s royal courts. The work is based on written documents recorded in the classics. It is part of her effort to record, and even relive, history, to promote the art of aroma, and to hail an exquisite, intimate, but close-to-nature, lifestyle.

The tradition of making, applying and appreciating incense in China dates back about 4,000 years. Previous generations used it to make fire, fumigate clothes, create an ambiance, or as a special effect at social gatherings and during religious events. It was even applied to healthcare and medical treatments, Lu says.

The perfumer, as a personal hobby, has been making incense in Lanzhou since 2012. She opened her studio in 2017. She also organizes workshops, teaching enthusiasts how to make it. Last month, Lu held a two-day solo exhibition in Lanzhou, sharing her aromatic artworks with visitors.

“Members of the royal household would get costumes perfumed with precious agarwood before important activities, because they thought it disinfected the clothes thoroughly,” she says. 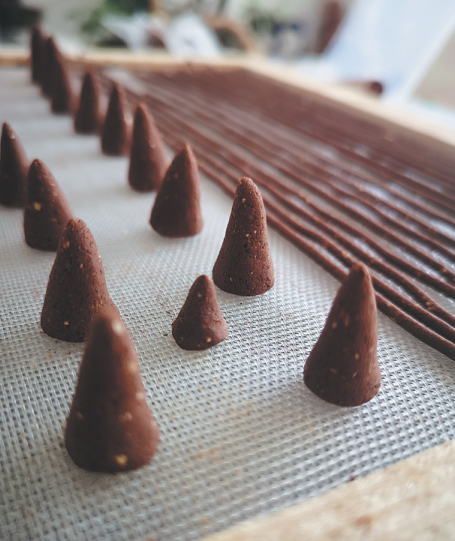 Some of the incense that Lu has made over the years displayed in various forms, from conical shapes to the more familiar incense sticks. CHINA DAILY

Lu adds that during the Southern Song Dynasty (1127-1279) there was a profession called xiangpo, where elderly women promoted using incense door to door.

Today, incense can be found in people’s studies or bedrooms, used to create a calmer environment.

Incense is produced differently to perfume, air freshener and essential oils, and no chemical additives are used, according to Lu. “It’s more natural, and it lingers longer, although the smell of incense is not as strong as perfume,” she says. “One of my favorite sachets, made of rosin and borneol, has not changed its aroma for three years.”

Recipes for Lu’s ancient incense come from the book Xiangsheng (meaning “the history of incense”), written by Zhou Jiazhou during the Ming Dynasty (1368-1644).

Known as “a dictionary of incense”, the book includes the origins, characteristics, usages, recipes, related poems and articles of about 400 kinds of incense. However, there are just a few descriptions about each scent, without any mention of the related production methods.

“What I can do is to strictly obey the recipe, using all possible types of perfume and tools it mentions,” she says.

The process can be long and complicated, as one type of incense may need a mixture of 15 different ingredients, many of which may have to be individually processed first.

There are strict routines to be followed. For example, Lu explains, nard (a plant) needs to be boiled with milk, then mixed with lemongrass to give it a pleasing aroma. Saffron crocus needs to be crushed by a stone mill with a little highland barley wine, while cedar seeds need to be picked in April, and boiled in water, then dried under the sunlight and soaked in yellow wine for some time, before being mixed with other elements.

The book also uses ancient methods of measurement, which makes it harder to convert them and obtain the equivalent modern amounts.

“It’s experimenting through repeated trial and error,” she explains. “It’s just impossible to succeed with just one trial.”

Lu once tried 10 times to make a particular type of incense. The first time it failed to burn, the second time the scent was too strong, the third time it created too much smoke, while the fourth it was too fragile. The problems continued to plague the process through to the ninth attempt.

Patience is required, adds Lu, who, as a graduate from a military college and an army veteran, has much discipline and perseverance. 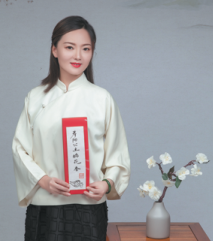 Lu developed an interest in Chinese herbal medicine as a child. It runs in the family. Her mother and grandmother are both practitioners of traditional Chinese medicine. The idea of re-creating ancient incense emerged during a visit to Japan. Kyoto, to be specific. The ancient capital has numerous temples and the scent of incense permeates them all.

At some incense stores in Kyoto, merchants still sell products based on recipes that the Chinese Buddhist monk, Jianzhen, took there during the Tang Dynasty (618-907), “which really moved me”, she says, recalling her first trip to the city in 2016.

“Domestically, experts tend to invent their own recipes, and many good, older ones have not been fully passed on,” Lu says. Inspired by this journey, she returned home determined to concentrate on re-creating old fragrances in the same manner as an architect would restore an ancient palace.

“The ancient incense will not decay over hundreds of years and its value cannot be measured by money,” she adds.

One of Lu’s customers, a woman surnamed Liu, 20, who bought sandalwood incense, says that it has a simple and elegant aroma, and brings to mind a handsome immortal that appears in a TV costume drama. Another patron, a man surnamed Zhang, 36, says the smell of ancient incense he bought from Lu is soothing.

Lu says she hopes to complete the re-creation of more ancient types of incense this year, some of which may be donated to museums in the future.