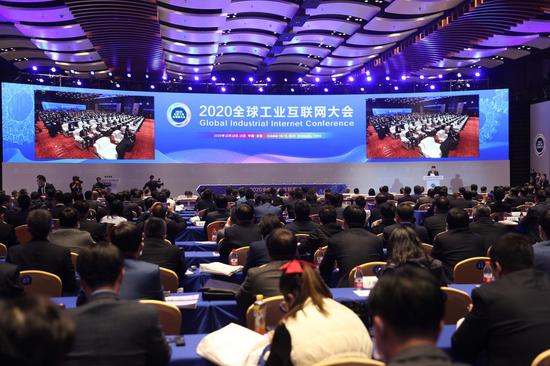 SHENYANG, Oct. 19 (Xinhua) — Industrial revolutions have been known to propel economic growth in the past decades, and the industrial Internet, facilitated by new technologies such as 5G and AI, is expected to bring metabolical changes not only to industrial sectors but also to people’s lives.

The role of new tech has become a highlighted topic among hundreds of Chinese and foreign experts, scholars, and representatives of leading enterprises in the field of the industrial Internet at the 2020 Global Industrial Internet Conference (GIIC), which opened on Sunday in Shenyang, capital of northeast China’s Liaoning Province.

The conference, with its theme of enabling high-quality economies and fostering new growth drivers, focuses on new applications and modes of the industrial Internet in the prevention and control of the COVID-19 pandemic and in helping enterprises resume work and production.

In the age of the industrial Internet, key technologies, such as the intelligent connection of 5G and mobile edge computing, industrial Ethernet technology, real-time digital warehouse construction, and AI-powered intrusion detection systems, are making machines more intelligent and driving change.

When the global economy was disrupted by the pandemic, the industrial Internet, integrating both online and offline resources, was explored to sustain productivity and keep supply chains afloat.

In China, new infrastructure related to the industrial Internet has made remarkable progress over the past years, said Liu Liehong, vice minister of industry and information technology.

So far, 180,000 enterprises in 300 cities in China are connected to the industrial Internet, and more than 70 large industrial internet platforms have been established, he said.

China will focus on developing 5G-powered industrial Internet, innovation, and industrialization of key technologies such as time-sensitive networking, knowledge graphs, and digital twins to extend the industrial Internet to various fields of the real economy, he said.

In the first three quarters, the country’s GDP expanded by 0.7 percent year on year, returning to growth after the 1.6-percent contraction in the first half of the year and the 6.8-percent slump in Q1, data from the National Bureau of Statistics (NBS) showed on Monday.

Eyeing high-quality growth, China needs to seize the opportunities in the era of the industrial Internet and boost innovation, integration, and opening-up, observers said.

Wolfgang Wahlster, director of the German Research Center for Artificial Intelligence, emphasized the widespread application of artificial intelligence and its promising future.

In smart factories, humans and robots will cooperate in every task, noted Wahlster, as he displayed a video of how workers collaborate with mechanical arms in a plant.

In the Shenyang factory of BMW Brilliance Automotive (BBA), a joint venture between the BMW Group and Brilliance China Automotive Holdings Ltd., the use of the industrial Internet has significantly improved manufacturing efficiency.

Luigi Gambardella, chairman of the China-Europe Digital Association, said the development of the industrial Internet would further boost the application of the Internet of Everything.

“For example, self-piloting vehicles can ‘communicate’ with each other on the road to minimize the possibility of traffic accidents,” said Gambardella.

Gao Jinji, an academic of the Chinese Academy of Engineering and professor at Beijing University of Chemical Technology, shared his view of how AI could reduce mechanical failure and ensure safe production.

“We can imitate the immune system in the human body to develop a self-healing operating system that allows machines to self-check and correct their own operations, which can help further improve production efficiency and safety,” said Gao.

With the world economy facing a recession, attendees of the conference agreed that the development of the global industrial Internet should be advanced to help with the revival of the economy.

Noting that the growth pace of the industrial Internet has slowed down in Russia due to the pandemic, Kolesnikov believed the market will soon recover with tremendous potential.

Kolesnikov also saw bright prospects of cooperation between Russia and China regarding the industrial Internet. “Last year, a Russian tech firm signed an agreement of cooperation with a Chinese firm in Qingdao. I believe more such cooperation is yet to come,” he said.

NASA prepares Mars helicopter for first flight on another planet