Chinese writer in Rome reflects on her experiences. Chinese-born writer and editor Hu Lanbo met her husband Carlo in 1989 during her three-month, 22,000-kilometer journey from her home city of Harbin in Northeast China to Europe.

They were traveling in a nine-car caravan along the Silk Road, the ancient trade route that linked China with the west as far back as two thousand years ago. They met and got married later that year and have lived in Rome ever since.

In the pandemic’s early days, Hu stopped going to her office and started working from home as editor of the bilingual China in Italy magazine.

Soon after, she was contacted by an Italian woman, who asked Hu to help source protective face masks for her son, who was suffering from leukemia at a time when such masks were hard to come by.

Via WeChat, a Chinese messaging application, Hu hooked up with two Chinese women-also residents of Rome-who could spare around 50 child-size masks.

Their collaboration soon evolved into a team effort: this small group of mothers eventually raised enough money-around 10,000 euros ($11,800)-to buy 20,000 masks, which they donated to a pediatric hospital in Rome. 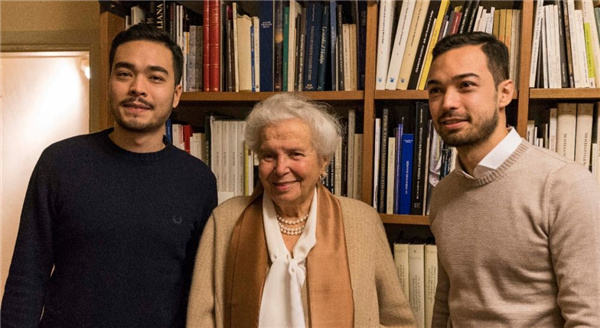 “Here in Italy we have the reputation of being a closed community, but if that was true, why was the reaction of the Chinese community so generous?” she asked. “We were in a unique situation: we had the cultural education China gave us, the collective spirit, but we were also part of Italy and we felt a responsibility connected to that.”

The interplay of the two cultures provided inspiration at the family level as well. Hu and her husband have two sons, Livio, 28, and Tiziano, 30. Both work in the wine sector. Drawing on their bicultural life experiences, they market Italian wines in China. Both of them were in China when the coronavirus began to spread there, but as soon as it was possible Livio returned to Italy-just when the first infections appeared there.

“We were very happy to have Livio home, but nobody could have guessed that the pandemic would last this long,” Hu said. “At the start, we thought it would be over in a few weeks or a few months. We were obviously mistaken.”

Hu said she was never overly fearful that she or the members of her family would contract COVID-19. At the same time, she was fully aware of how the pandemic changed life for her, and for people practically all over the world. It also made her realize that, in a certain sense, she had become more Italian than Chinese.

Hu Lanbo (right) with the then Italian ambassador to China. (Photo provided to China Daily)

This realization played a major role in her decision to put pen to paper and relate the stories of Chinese residents’ life in Italy during the pandemic.

“As I spoke to other Chinese people in Italy I realized that almost every individual, family, or organization played some role in providing masks or helping out in some other way, and the idea for the book came from that,” she said.

Hu said she invited members of the Chinese community living permanently in Italy-tourism professionals, actors, translators, designers, writers, musicians, educators and mediators, from Palermo in southern Italy to Turin in the north-to tell the story of how the pandemic had changed their lives. She said 20 people submitted stories that appeared in the book, even including one poem. Most were written in Chinese and translated into Italian.

The 20 best stories appeared in the 232-page book Noi Restiamo Qui: Come La Comunita Cinese Ha Vissuto L’Epidemia (We’ll Stay Here: How the Chinese Community Lived Through the Epidemic). Hu said that collecting the stories and editing the book, which was published in last September in both Chinese and Italian, became her main focus during the pandemic.

“Now it’s been 10 months since the start of the pandemic in Italy and five months since we received the last contribution to the book,” she said. “We have captured a piece of history by telling the stories of our lives during such an unusual period, and that gives this book meaning.”

“That whole experience also made me realize how much a part of Italy I had become,” said Hu. “Even after 31 years of living in Italy, I sometimes feel like a foreigner. But there are other times when I realize this country (Italy) is home to me now.”