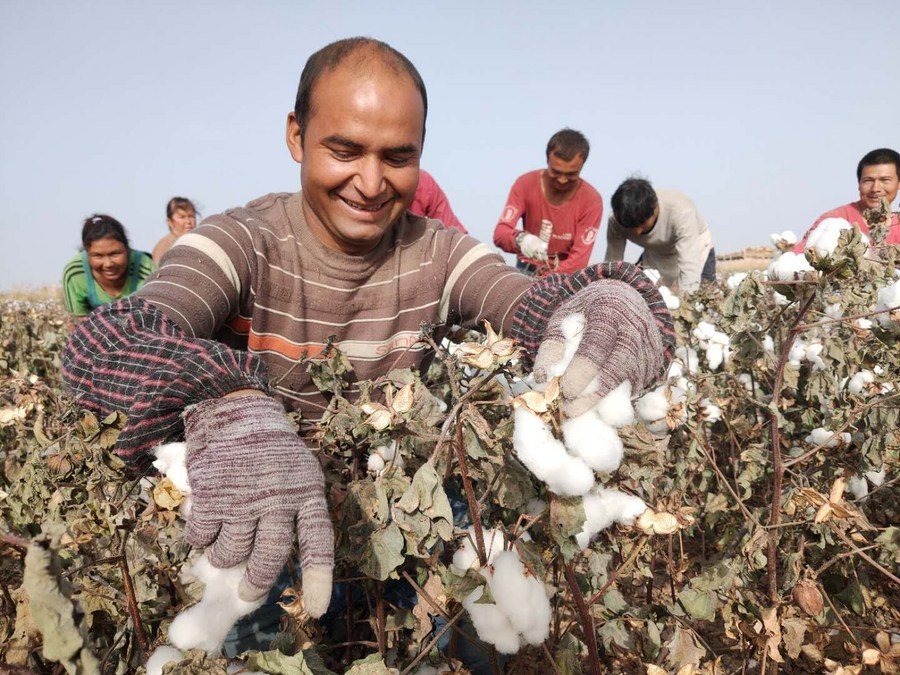 URUMQI, Oct. 24 (Xinhua) — For 34-year-old Nebi Jelili in northwest China's Xinjiang Uygur Autonomous Region, the soft cotton in the fields more closely resembles nuggets of gold, as by picking the crop, he managed to change his family's life.

Nebi is a villager in Lop County of south Xinjiang's Hotan Prefecture, and is well-known among the locals. He was named a champion cotton picker in his prefecture last year as he picked over 240 kg of cotton each day for 50 days in a row.

The title is a longstanding honor in Xinjiang, China's largest cotton hub, which has ranked first in the country in terms of total cotton output and planting area for 25 consecutive years.

Though cotton-picking machines are gaining ground in Xinjiang, many cotton fields, especially those in south Xinjiang, are too scattered to be harvested by machines and still require workers to handpick the crop.

Nebi's family used to rely on farming for a living, but their fields were too limited to support them. A car accident in 2007 even plunged the family into debt.

In the early 2010s, Nebi joined the cotton-picking migrant workers to boost the family's income. He could only pick 100 kg each day at first, while now he can pick some 280 kg.

"There is no secret to becoming a cotton-picking champion. All you have to do is to work hard," said Nebi, who starts his day before dawn and keeps working while others take breaks.

Nebi is paid about 2 yuan (about 30 U.S. cents) for each 1 kg of cotton he picks. He pocketed some 30,000 yuan last year by picking cotton, making up over 70 percent of his family's annual income.

He soon made his first pot of gold after years of picking cotton, and he knows that in the years ahead he will no longer be able to rely on picking cotton alone, given the increasing reliance on cotton-picking machinery.

In 2019, Nebi invested 100,000 yuan to set up a recycling center with other villagers, and his wife opened a cold noodles storefront. They raked in about 40,000 yuan last year.

As a self-made man, Nebi has been invited to share his experiences in picking cotton and working his way out of poverty. "Hard work pays off. For those who have doubts, they are welcome to visit my home to see the changes."