BEIJING, Dec. 18 (Xinhua) — China’s top leaders have set the economic priorities for next year in the key Central Economic Work Conference held from Wednesday to Friday in Beijing.

In a speech at the conference, Xi Jinping, general secretary of the Communist Party of China (CPC) Central Committee, Chinese president and chairman of the Central Military Commission, reviewed the country’s economic work in 2020, analyzed the current situation and arranged the economic work for next year.

Recognizing the country’s hard-won economic achievements this year amid effective control of COVID-19, the meeting outlined specific tasks for 2021, a year of special importance as it marks the beginning of China’s new five-year plan period and the 100th founding anniversary of the CPC.

Premier Li Keqiang, Li Zhanshu, Wang Yang, Wang Huning, Zhao Leji and Han Zheng, who are members of the Standing Committee of the Political Bureau of the CPC Central Committee, attended the conference. 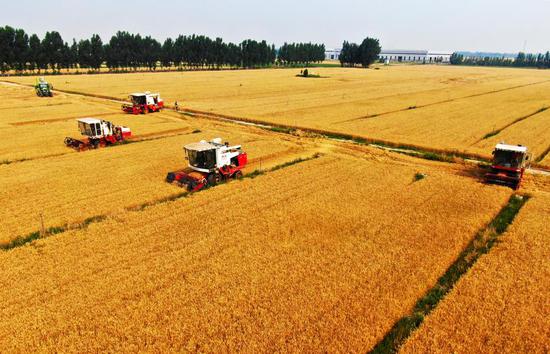 This year’s conference is especially under the spotlight as global policymakers and investors are watching how the world’s second largest economy will continue to emerge from the pandemic and help restore global economic growth.

China has become the only major economy in the world to achieve positive growth in 2020, the meeting said, attributing the achievements to the leadership of the CPC Central Committee and national efforts.

For next year, China will work to ensure that its economy runs in an appropriate range with the implementation of targeted and effective macro policies, the meeting said.

It will keep its macro policies consistent, stable and sustainable in 2021, with continued implementation of a proactive fiscal policy and prudent monetary policy, according to the meeting.

In 2021, the country will take a solid first step in building the new development paradigm in which domestic and foreign markets reinforce each other, with the domestic market as the mainstay.

The potential of the domestic market should be fully tapped, the meeting said, calling for the expansion of consumption and effective investment that are oriented toward improving people’s livelihoods.

China will strengthen its national strategic technologies in 2021, and step up efforts to resolve major difficulties that constrain national development and security, the conference said.

As uncertainties still loom over the global economy, the meeting stressed efforts to guard against various risks and challenges.

The meeting listed anti-monopoly supervision as one of the key tasks for next year, vowing to prevent disorderly capital expansion.

Laws and regulations concerning the identification of platform monopolies, management of data collection and use, and protection of consumers’ rights and interests will be improved, it stressed.

Financial innovation must be advanced under prudent supervision, the meeting said.

On the financial front, solid efforts should be made to resolve hidden debts of local governments, the meeting said.

China will work to solve prominent housing problems in big cities as one of its key economic tasks for 2021.

Sticking to the principle that “houses are for living in, not for speculation,” the country will adopt multiple policies to promote steady and healthy development of the real estate market, the meeting said.

The country will also strive to tackle problems related to seeds and farmlands next year as part of its efforts to ensure food security, it said.

While developing its domestic market and addressing potential challenges are among the priorities set by the government, Chinese leaders are also aiming for a more open and inclusive growth that can be shared by all from the world.

China will promote reforms and opening-up in an all-round way, the meeting said, calling for strengthened coordination of international macro policies.

China will positively consider joining the Comprehensive and Progressive Agreement for Trans-Pacific Partnership, and attach importance to the application of international norms to safeguard national security, it said.

As part of China’s commitment to tackling the global issue of climate change, the country will seize time to formulate an action plan for peaking carbon dioxide emissions before 2030, and support areas with favorable conditions to peak the emissions ahead of the schedule, according to the meeting.

China has previously announced that it will strive to peak carbon dioxide emissions by 2030 and achieve carbon neutrality by 2060.

Next year will be of special importance in the process of China’s modernization drive, the meeting said, calling for efforts to ensure a good start of the 14th Five-Year Plan period (2021-2025) and excellent achievements to celebrate the 100th founding anniversary of the CPC.