The value of the forest ecosystem in east China’s Shanghai was 15.26 billion yuan in 2019, with industry insiders expecting the figure to grow in 2020, thepaper.cn reported.

The forest coverage rate in Shanghai was only 3 percent at the end of the 1990s, and the figure reached 18.49 percent in 2020, said Professor Liu Chunjiang from the Shanghai Jiao Tong University, who added that the growth rate ranks as one of the highest nationwide. The value of the forest ecosystem in Shanghai was calculated by Liu based on results of a project led by the professor that monitored, investigated and evaluate local forest recourses.

The indices on the value of forests covered eight aspects – tourism and leisure, removal of air pollutants, carbon fixation and oxygen release, water conservation, protection of biodiversity, soil formation, promotion of nutrient cycling and protection of forest resources. The project offers technical support for the improvement of Shanghai’s forest ecosystem and promotes the city’s bid to become a more liveable city.

To obtain data on Shanghai’s forest ecosystem, the city has built four monitoring stations in Zhongshan Park in the downtown area, Pudong Jinhai Wetland Park, Yexie township in Songjiang district located in the middle reach of the Huangpu River, and on Chongming Island, the backyard of Shanghai.

The sites monitor the temperature and humidity of the atmosphere, density of negative oxygen ions, and air pollutants. After being analyzed, the data monitored at the sites is then reported to Shanghai’s forestry bureau and the National Forestry and Grassland Administration on a regular basis. 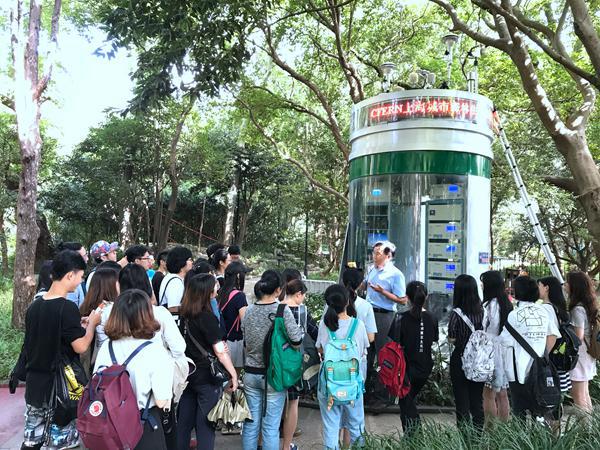 According to Liu’s team, the value of the forest ecosystem of Shanghai in 2019 was 7 percent higher than that calculated a year before. In the process of calculating the value of a forest ecosystem, four categories of products and services are taken into account, Liu said.

The first is the forest ecosystem’s supporting services, namely, the value of chemical elements a forest has retained, Liu explained. In this regard, in order to protect the material basis of a city’s ecosystem, it is imperative that the dry tree branches and leaves in forests are not removed. At the same time, animals and plants in a forest also contribute to its economic value.

A forest is a place where herbal plants, bushes, and fungus grow. These plants supply human beings with food, fiber, oil, nuts and other products. The economic value of these products, when combined, constitutes a forest’s value. Photo shows the four monitor sites of the forest ecosystem in Shanghai. (Photo courtesy of the interviewee)

The value of a forest’s ecosystem is also produced through the cold island effect, which is closely related to a forest’s functions such as absorbing and removing air pollutants, lowering city temperatures, fixing carbon and releasing oxygen. In addition, the cultural services provided by a forest, such as forest parks, can also generate economic benefits.