After their 89-year-old father, who has difficulty walking, expressed his hope to see a high-speed railway under construction near their home, his three sons decided to carry him on their backs to make his wish come true.

On Feb.11, the family was having a conversation about the high-speed railway station at Furong township in Yongshun county, central China’s Hunan province, which was under construction. The father, who had never seen a high-speed railway, said he wanted to have a look at it. Photo shows the 89-year-old and his wife. (Photo/Wechat account: chineserailways)

As the railway station in Furong township is located in a mountainous area, it would have been too challenging for the old man to travel there all by himself, said his granddaughter surnamed Wang, who shot a video to record the whole process of his grandfather going to the station in this special way.

Carried by his three sons, the old man arrived at the train station in about 40 minutes. He was very happy and satisfied to see the station, and marveled at the high-speed train, which will make it much easier for people to travel once completed. 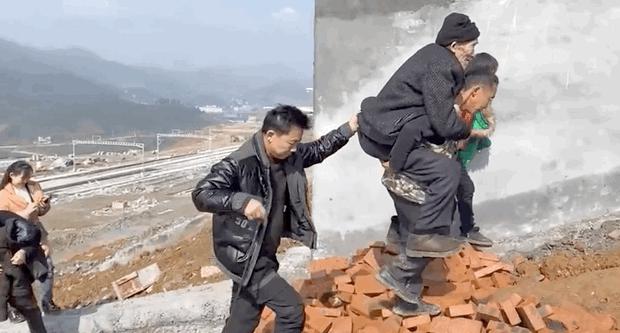 What the old man saw is a section of the Zhangjiajie-Jishou-Huaihua high-speed railway in Hunan province, with a mainline length of 246.6km and a design speed of 350km/h. It is scheduled to open and go into operation in 2021. Running through mountainous regions and connecting many tourist attractions, the railway is expected to bring economic benefits to places along the line with a low level of economic development.