▲National Guard soldiers patrol the streets the morning after Americans voted in the presidential election on Wednesday in Philadelphia, Pennsylvania. Photo: AFP

Anxiety, suspicion and civil unrest in cities across the US are seemingly pushing the most powerful country in the world to chaos and turmoil, as the outcome of the 2020 presidential election, one of the most bruising races in modern times, remains unsettled a day after polls closed.

The National Guard was activated in Portland, President Donald Trump protesters converged on Black Lives Matter Plaza, Trump backers protested ballot counts, and Minneapolis and New York City police made arrests and confiscated weapons… all in the past 24 hours.

Following relatively peaceful demonstrations at the start, tensions started running high into the night as the situation went beyond the expectation of most mainstream media outlets, polling institutes, commentators and observers in the US and the rest of the world, who believed Democratic challenger Joe Biden would win by a landslide.

Supporters of Trump and Biden are in a high state of anxiety and confrontation. Trump’s declaration of victory in the early hours of Wednesday roiled Biden supporters. But Trump is now facing a tough battle as Biden needs to win just one of four contested states for victory, prompting Trump’s backers to demand that the count be stopped.

More results are expected in the coming hours in the battlegrounds of Arizona, Georgia and Pennsylvania, which could determine the election’s outcome.

Chinese experts said no matter how many votes Trump eventually gets, if he loses, his supporters will not easily accept it, and social unrest or chaos cannot be avoided.

Trump’s campaign is considering taking legal action in Arizona and Nevada as votes are still being counted, two sources told CNN. The campaign has launched legal battles in several battleground states, and called for a recount in Wisconsin, Pennsylvania, Michigan and Georgia.

Several states have opposed the lawsuits, calling them “meritless,” “an attempt to confuse and obfuscate what actually is a very transparent, secure process,” “seeking to intervene in an ongoing Supreme Court case involving the deadline for receiving mail-in ballots,” and “buying time to slow the counting.”

Legal action will begin in federal courts before working its way up to the Supreme Court. Meanwhile, it is up to each state to decide whether the votes are recounted, said Lü Xiang, a research fellow on US studies at the Chinese Academy of Social Sciences in Beijing.

Suspicions are mounting as the current Supreme Court is dominated by conservative justices. If Trump is able to take the fight there, it will be likely for the court to rule that the mail-in ballots in key swing states are invalid, bringing a different election outcome.

However, Lü believes Trump will not be able to take it to the US Supreme Court, as current data show it is highly probable that Trump will lose the crucial battle in Pennsylvania, Lü said.

Even if he does take it to the Supreme Court, there is little chance he will win his lawsuit. “The Supreme Court will not reject an apparent election result, nor will those judges who favor Republicans choose to harm their own reputation to fight for Trump’s reelection,” he said.

Xin Qiang, deputy director of the Center for American Studies at Fudan University in Shanghai, also believed that as long as Trump lacks adequate evidence to demonstrate election fraud, the lawsuit will end quickly, despite the fact that six of the judges in the Supreme Court are conservative-leaning. 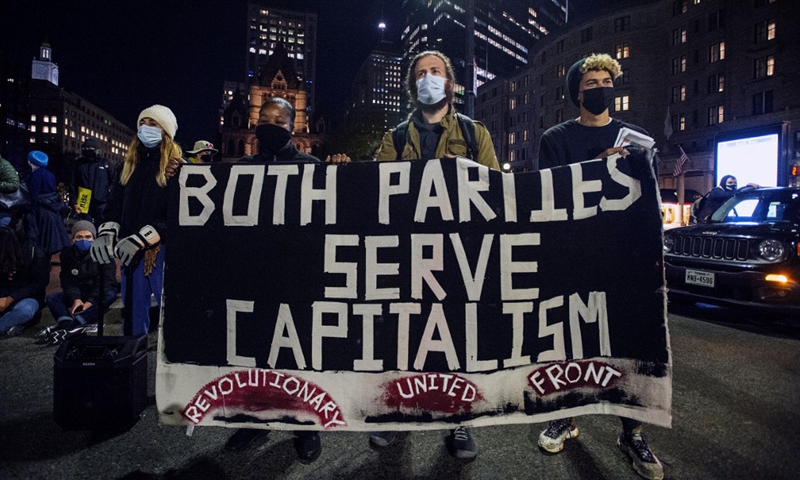 ▲People gather at Copley Square at the Boston Public Library calling for a new political party and system, not happy with either political candidate, in Boston, Massachusetts on Wednesday. Photo: AFP

There is a precedent in American history for an election result to be appealed at the Supreme Court. The race between George W. Bush and Al Gore for the White House in 2000 finally came down to Florida, where the vote was unusually close. The two sides took the case to a Florida court. A state court ruled in Gore’s favor, but the Supreme Court later overturned that decision, which sent Bush to the White House.

The scenario this year is different from in 2000, when the margin between the votes was very close and the Supreme Court made the final decision.

A recount of the votes can be triggered when the margin of victory is no more than 0.5 percent, but the current gap in most states is greater than that. This means that Trump can only file a lawsuit against the result if he possesses adequate evidence of malpractice in the collection of votes, Lü said.

If Trump loses, it remains uncertain whether he will be willing to hand over power peacefully. Chinese experts fear that the US could be plunged into a political and even constitutional crisis.

Trump would use any excuse to reject the result of the election, which could end up with a protracted lawsuit, Xin of Fudan University, told the Global Times on Thursday.

Conflicts between Republican and Democratic supporters will be inevitable, Xin believes. “No matter how many votes Trump eventually gets if he loses, his supporters will not easily accept it. Social unrest or chaos cannot be avoided,” he said.

Experts predicted that as division has been the norm in the US since 2008, the divergence between different groups will turn into hostility, and Biden will face unprecedented difficulties in dealing with a divided US if he is elected.

“The COVID-19 pandemic will be the first thing for Biden to handle. The economy is waiting to recover and deep-rooted ethnic conflicts need to be resolved,” Lü said.