Volunteers born after 2000 have become the backbone of the third China International Import Expo (CIIE), which concluded on Nov. 10, making great contributions to the grand global trade fair.

Among all the 4,000 “little leaves” –volunteers of the event, 2,637 were born after 2000, accounting for 54 percent of the total, according to the Shanghai municipal committee of the Communist Youth League. The nickname “little leaves” came from the shape of the CIIE venue, the National Exhibition and Convention Center in Shanghai, as it resembles a huge four-leaf clover.

They engaged in a wide variety of work, including consultation and guidance, disseminating information on epidemic prevention and control, and first aid. The smiles on their faces and their careful and hard efforts became an eye-catching scene of the six-day event.

Although they are quite young, some have attended the CIIE as volunteers for three consecutive years. Zhu Meiting from Shanghai Vocational College of Agriculture and Forestry was one of them. The veteran volunteer worked as a guide this year, while in the first and second CIIE she helped maintain order at the airport and engaged in catering.

As her experience has accumulated over the years, she has gained a sense of achievement and responsibility, with new “little leaves” turning to her for help.

“When they learned about my age, they were pretty surprised,” she said proudly, “the CIIE is improving year by year, and so is the work of the volunteers. I feel like I am growing up with the CIIE,” Zhu added. 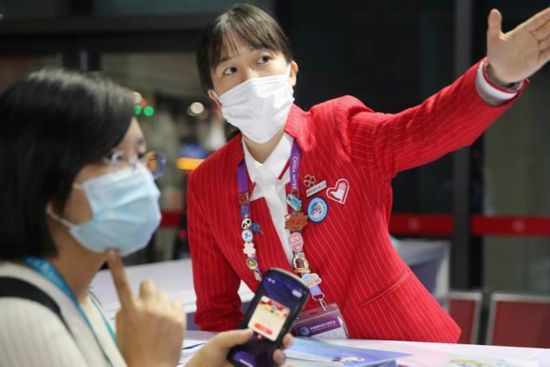 Many of the young volunteers’ connection with the annual event started with their beloved family members. Tao Zui, a student of Shanghai University of Engineering Science, came from a “CIIE family.” Tao’s father was engaged in the preparation work, her uncle set up a booth in the venue, and her mother, a doctor of traditional Chinese medicine, provided medical services for the event and shared the latest epidemic prevention and control information with them.

Although they all worked for the CIIE, they hardly had the chance to meet each other at the venue. However, Tao said she became energetic again when she thought about her family members who were also busying working for the event even if her work could be very exhausting sometimes.

The “little leaves” are not just volunteers of the CIIE. They incorporated their own development into the development of the country, as some of them are also demobilized military officers, poverty alleviation volunteers, volunteers participating in a volunteer teaching program, and volunteers in the fight against the COVID-19 epidemic. In this extraordinary year, they have left their mark in their own way.

It’s completely possible for China to double economic output or per capita income by 2035: Xi