The world economy has been undergoing a deep recession this year amid the mounting fallout from the COVID-19 pandemic. Yet China is the only major economy that has registered positive growth, indicating the country’s significant role at a time of crisis.

Economists and observers believe that China’s better-than-expected recovery — driven by a containment success, government spending and strong exports — has spillover effects on its neighbors and trading partners, and will support the global economy’s “difficult climb” going forward.

In its latest World Economic Outlook (WEO) report released on Tuesday, the International Monetary Fund (IMF) projected the global economy to contract sharply by 4.4 percent this year, 0.8 percentage point above its June forecast.

Despite the upward revision, “all countries now face a ‘Long Ascent’ — a journey that will be difficult, uneven, uncertain, and prone to setbacks,” IMF Managing Director Kristalina Georgieva said Wednesday at a virtual news conference during the annual meetings of the World Bank Group and the IMF.

In a video interview with Xinhua earlier this week, IMF Chief Economist Gita Gopinath said outcomes in the second quarter have been less dire, and the global recovery is expected to be strong in the third quarter. However, the momentum could slow down after that.

“We are still living with the pandemic in many parts of the world, that is going to slow the recovery because especially contact-intensive services sectors will not recover fully as long as the pandemic is not under control,” Gopinath said.

There remains tremendous uncertainty around the global economic outlook, according to the WEO report, which highlighted downside risks such as the resurgence of the virus, growing restrictions on trade and investment, as well as rising geopolitical uncertainty.

“We are very concerned about possible second waves,” Gopinath said. “And if indeed there is a serious second wave, which leads to much more widespread containment measures and lockdown, then that certainly will be a big downside risk to our forecast.” 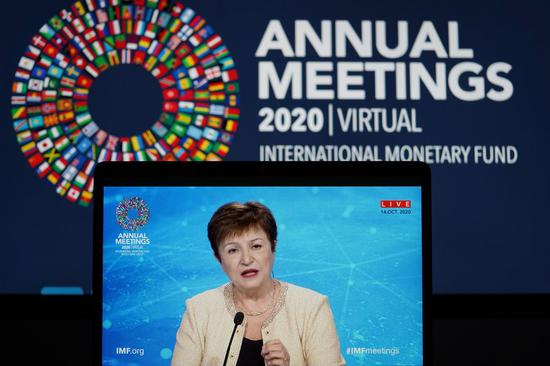 International Monetary Fund (IMF) Managing Director Kristalina Georgieva speaks during a virtual news conference for the annual meeting of the World Bank Group and the IMF in Washington, D.C., the United States, on Oct. 14, 2020. (Xinhua/Liu Jie)

World Bank Group President David Malpass said Wednesday that the global economy is experiencing a so-called K-shaped recovery, as advanced economies have been able to provide support while the poorest countries are facing an increasingly desperate recession.

The cumulative growth in per capita income for emerging-market and developing economies (excluding China) over 2020-2021 is projected to be lower than that for advanced economies, which means the divergence in income prospects between the two groups is projected to worsen, Gopinath noted.

Gopinath said this crisis “will likely leave scars well into the medium term,” as labor markets take time to heal, investment is held back by uncertainty and balance sheet problems, and lost schooling impairs human capital.”

According to the latest WEO report, China’s economy is expected to grow by 1.9 percent this year, 0.9 percentage point above the IMF’s June forecast.

The upward revision for China resulted in part from a better-than-projected performance in exports, Gopinath said. “The demand for medical equipment and for office equipment to work from home, that’s been high. And China’s exports have gone up because of that,” she said.

A second factor, she continued, is the strong stimulus from public investment in infrastructure. “That also surprised on the upside.”

Noting that China has recovered “very quickly” from the pandemic, Tobias Adrian, financial counselor and director of the IMF’s Monetary and Capital Markets Department, told Xinhua that the country’s containment measures were “aggressive and extremely successful.”

“I think the rest of the world can learn from China because China has been very effective in fighting the pandemic and I think some of the methods in terms of tracing the spread of the virus and containing spreading are really exemplary,” Adrian said.

Geoffrey Garrett, dean of University of Southern California (USC) Marshall School of Business, told Xinhua via email that the COVID-19 pandemic is accelerating trends that were already there.

Garrett noted that before the pandemic, the annual growth gap between advanced economies and China was down to about 4 percentage points.

Now the IMF forecast for this year estimates China’s growth at 1.9 percent as compared with advanced economies at minus 5.8 percent, indicating a much wider growth gap, he said.

The World Bank, meanwhile, has recently projected China’s economy to grow by 2 percent this year, up from the 1-percent growth projection in June, according to the October 2020 Economic Update for East Asia and the Pacific.

The growth will be boosted by government spending, strong exports, and a low rate of new COVID-19 infections since March, but checked by slow domestic consumption, the World Bank said.

People walk past the headquarters of the International Monetary Fund (IMF) in Washington D.C., the United States, July 17, 2020. (Xinhua/Liu Jie)

The IMF official urged China to continue rebalancing its growth model, noting that there is still a need to move toward a consumption-driven growth model, and a growth model that is more inclusive and greener.

China’s foreign trade posted solid growth in the third quarter despite rising protectionism and unilateralism worldwide amid the raging COVID-19.

Chinese exports and imports will stay a robust uptrend in the coming months, as shipments of products benefiting from virus-related demand should continue to hold up, said a recent study released by the British thinktank Oxford Economics.

Meanwhile, underpinned by a strong domestic demand, China’s sequential import momentum will pick up further in the coming months, the thinktank added.

Hailing China’s role in the global recovery, Gopinath said the country’s growth has “spillovers” especially to its neighbors. Through global trade, China is obviously playing a key role in supplying much-needed medical equipment, she said, yet cautioning that China will also be under risks if there is “continued weakness in the global economy.”