Chinese President Xi Jinping, also general secretary of the Communist Party of China Central Committee and chairman of the Central Military Commission, speaks while presiding over a meeting on the preparation work for the Beijing 2022 Olympic and Paralympic Winter Games at the Great Hall of the People in Beijing, capital of China, Jan. 20, 2021. Xi made inspection tours of Beijing and Hebei and presided over a meeting on the Beijing 2022 preparations from Jan. 18 to 20. (Xinhua/Ju Peng)

BEIJING, Jan. 20 (Xinhua) — President Xi Jinping has called for advancing preparation work for the Beijing 2022 Olympic and Paralympic Winter Games against difficulties and “with greater perfection.”

Xi, also General Secretary of the Communist Party of China (CPC) Central Committee and Chairman of the Central Military Commission, made the remarks on Wednesday when presiding over a meeting on the Beijing 2022 preparations, following his inspection tours of Beijing and Hebei.

Xi called on conducting the preparation work “with greater perfection,” replanning and readjusting all work in accordance with new circumstances while focusing on both epidemic prevention and control and the organization of the Games.

Xi said “simplicity, safety and excellence” should be prioritized in the Games’ preparation. He also called on guarding against and comprehensively neutralizing all kinds of risks and diligently carrying out the preparation work, including competition organization and services, technological application and cultural activities.

As the Beijing 2022 preparations have entered a crucial stage, Xi urged efforts to center around staging the Games as scheduled and comprehensively sort out and implement all preparation work. 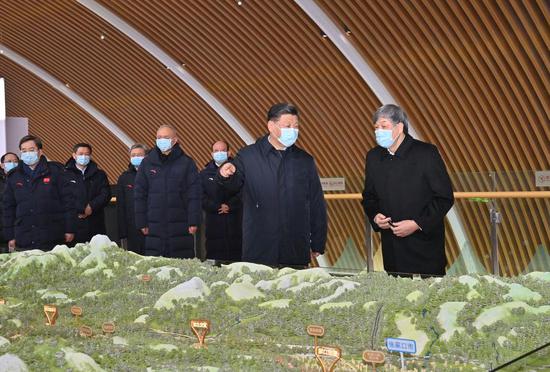 Chinese President Xi Jinping, also general secretary of the Communist Party of China Central Committee and chairman of the Central Military Commission, visits the athletes' service hall, observes the sand table of the Olympic competition zone and the Beijing-Zhangjiakou high-speed rail link, and learns about the construction of the Taizicheng rail station close to the competition venues and athletes' village of the Beijing 2022 Olympic and Paralympic Winter Games after arriving in Zhangjiakou by taking the Beijing-Zhangjiakou high-speed rail, in Zhangjiakou, north China's Hebei Province, Jan. 19, 2021. Xi made inspection tours of Beijing and Hebei and presided over a meeting on the Beijing 2022 preparations from Jan. 18 to 20. (Xinhua/Yue Yuewei)

He required the preparation work to be carried out with respect to six key points:

– Focusing on venue construction and operation, completing the non-competition venues on schedule, and promoting the construction of complementary facilities, including accessibility, as well as increasing necessary facilities for virus-testing, quarantine and emergencies.

– Advancing competition services by adhering to the principle of a “unified standard for three competition zones,” namely, urban Beijing, Yanqing District and Zhangjiakou in Hebei Province.

– Enhancing communication and cooperation with the International Olympic Committee and other international sports organizations and strictly implementing epidemic prevention and control measures.

– Escalating the development of winter sports and encouraging more youngsters to participate in winter sports.

– Promoting coordinated development of the Beijing-Tianjin-Hebei region, striving for more achievements in transportation, environment, industry and public services, and proactively planning the post-games utilization of the Winter Olympics venues.

Delivering an excellent Beijing 2022 is a major task of the Party and the country, and it is a solemn commitment to the international community, said Xi.

Xi also stressed the adherence to the principle of hosting “a green, inclusive, open and clean Games” throughout the preparation process and delivering a “fantastic, extraordinary and excellent” Olympic and Paralympic Winter Games to the world.

Xi emphasized that Beijing 2022 is an event of great significance at the outset of the 14th Five-Year Plan period from 2021 to 2025. He called for the enhancing of a sense of responsibility, mission and urgency during the preparation work.

Xi noted satisfying results had been produced over the past five years, thanks to organizers’ efficient work, the cooperation of all relevant parties, and close coordination with international sports organizations.

Xi also said that Beijing and Hebei should carry out their duties and complete all of their missions on time and with high quality.

Xi called on the Games’ organizing committee to fulfill its missions, adhere to the regulations and institutions, adopt stringent budget management, control the Games’ costs, avoid corruption and make the Games as “pure and clean as ice and snow.” Enditem